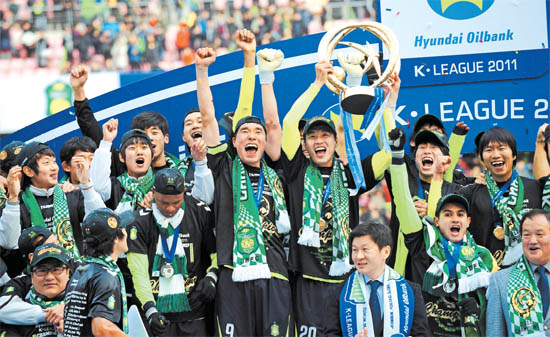 Jeonbuk won the home-and-away championship series with a 4-2 aggregate score after stealing a 2-1 win on the road on Wednesday.

Jeonbuk, the regular season champion, was well positioned to win the series after its away victory, as no K-League team has ever come back from a first-leg loss to win the title. The championship series put an end to Ulsan’s Cinderella run after becoming the first sixth-seeded squad to make it to the finals. 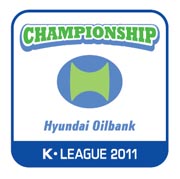 With the away-goal rule in place, Jeonbuk could have claimed the K-League title even with a 1-0 defeat to Ulsan. But Jeonbuk sealed the championship with an exciting come-from-behind win, thanks to goals from Brazilians Enio Oliveira Junior and Luiz Henrique da Silva Alves.

“I told my players to earn the title with a victory,” Jeonbuk coach Choi Kang-hee said at the postgame press conference. “Because of the pressure, our performance wasn’t our best, but the players did a good job to seal the win.”

“With this win, I think we’ve built a foundation to become a prestigious club in the K-League,” Choi said. “We need more trophies, a bigger goal and a desire to achieve that.”

With 33,554 fans gathered to watch the final K-League match of the season, Jeonbuk failed to break through Ulsan’s tight defense in the first half.

Jeonbuk striker Lee Dong-gook, the second-best scorer in the regular season with 16 goals, earned a penalty in the 34th minute, but his shot was blocked by Ulsan goalkeeper Kim Young-kwang.

It was a crucial moment for Lee, the former Middlesbrough and Werder Bremen forward, since converting the penalty would have tied him with Woo Sung-yong on the all-time K-League scoring list with 116 goals.

The 0-0 deadlock was finally broken in the 56th, and it was Ulsan who took the lead with a goal from forward Seol Ki-hyeon. Seol, the 32-year-old veteran who once played in the English Premier League, received a pass from Brazilian Lucio Teofilio da Silva and blasted a shot past Jeonbuk goalkeeper Kim Min-sik.

But Ulsan’s one-goal lead lasted only two minutes as Jeonbuk earned another penalty and this time it was successfully converted by Enio.

The 30-year-old Brazilian was once again Jeonbuk’s savior. Before scoring twice in the first leg, Enio tallied two goals in the 2009 final, which Jeonbuk won 3-1. He now has five career goals in championship games, the most by any player in K-League history.

But Enio was not the only Brazilian who contributed to the team’s victory yesterday. Luiz, 30, stepped up in the 67th with a flashy goal, dribbling past two Ulsan defenders and firing a screamer just outside the penalty box to put the score at a comfortable 2-1.

Ulsan changed three players in hopes of turning the table around, but its attack couldn’t penetrate Jeonbuk’s defense.

“Giving up the penalty after leading 1-0 was a crucial moment for us,” said Ulsan coach Kim Ho-kon.