Tiger roars back after 2-year drought

Tiger roars back after 2-year drought 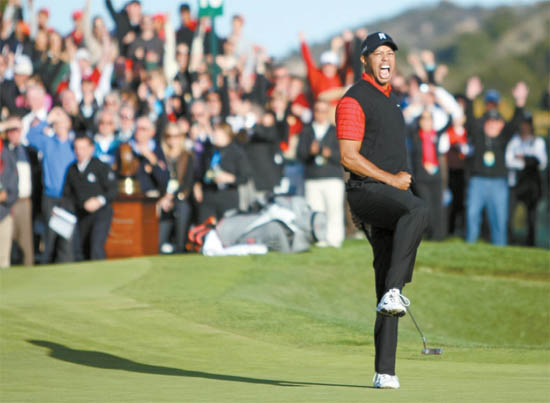 Tiger Woods reacts after clinching victory at the 18th hole on the final day of the Chevron World Challenge at Sherwood Country Club in Thousand Oaks, California, Sunday. [AFP/YONHAP]


THOUSAND OAKS, California - Tiger Woods birdied the last two holes to win the Chevron World Challenge on Sunday, the one-shot triumph being his first victory since a 2009 sex scandal shattered his iconic image.

Woods had gone 26 starts worldwide in more than two years without a victory as personal turmoil was followed by struggles on the course with swing changes and, this year, injuries that curtailed his playing time and stalled his pursuit of Jack Nicklaus’ record of 18 major titles at 14.

On Sunday, the former world number one delivered under pressure, making birdies at 17 and 18 to erase a one-shot deficit and beat former Masters champion Zach Johnson by one stroke in the unofficial 18-man event.

“It feels great,” said Woods, who let out a roar as his six-foot birdie putt at the final hole dropped, then shook hands with Johnson as fans at Sherwood Country Club bellowed their approval.

“I wasn’t really thinking, I think I was yelling,” Woods said. “I think I was screaming something, but it was just that I won the golf tournament. I pulled it off with one down, two to go. To go birdie-birdie is as good as it gets.”

Woods’ last victory had come at the Australian Masters on Nov. 15, 2009. Later that month, he crashed his car outside his Florida home in the hours after the Thanksgiving holiday, an incident that led to the unveiling of his secret sex life.

Asked if he could characterize his feelings after finally ending his victory drought, Woods just beamed.

“It feels awesome, whatever it is,” said Woods, who is projected to rise from his current 52nd in the world rankings to 21st.

Woods’ final-round 69 gave him a 10-under total of 278, and he donated the $1.2 million winner’s prize to his charitable foundation, for which he hosts this event. While the Challenge is not an official PGA Tour tournament, it counts toward the world rankings.

England’s Paul Casey, dead last in the 18-man field after a first-round 79, was the unlikely third-place finisher with a 69 for 283.

But the final round was all about Woods and whether he could out-duel Johnson and finally get himself back into the winner’s circle after promising performances at the Australian Open and in the United States’ Presidents Cup triumph in November.

Despite a few “loose shots,” Woods said his new swing held up admirably. Back-to-back birdies at 10 and 11 gave Woods a two-shot lead over Johnson, but Woods gave a stroke back with a bogey from a bunker at the 12th. Johnson rattled in a birdie putt at the par-five 13th to pull level, then went up a stroke with a birdie at the par-five 16th, where Woods was unable to hole his birdie effort from the fringe

At 17, Woods watched as Johnson’s birdie putt lipped out, then rolled in a 15-footer for a birdie and a share of the lead.

Overall, Johnson relished the tension of the round against an all-time great keen to prove himself.

“If the man is healthy, that’s paramount,” Johnson said. “In every situation, he knows how to execute and win.”