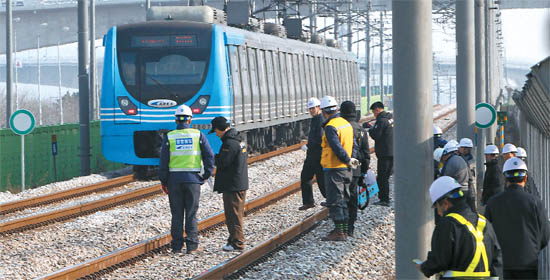 
Five maintenance workers were killed yesterday when they were hit by an Airport Express train during a routine winter inspection, after they began working earlier than scheduled in hopes of getting out of the cold weather.

According to Korail, an AREX train heading to Incheon International Airport collided with six repairmen who were working on the tracks near Gyeyang Station at around 12:31 a.m. yesterday. Five were immediately killed and one was seriously injured.

Two additional workers on the tracks, who were about 10 or 20 meters away from the others, managed to escape the oncoming train.

The train, running 80 kilometers (49.7 miles) per hour, departed from Gyeyang Station at around 12:27 a.m. and was supposed to arrive at Geomam Station at around 12:35 a.m. The train was the last one on the day’s schedule and was delayed about 15 minutes because of the accident.

Korail said the employees were scheduled to start working at 12:50 a.m., when the last train arrived at its last stop, but they entered the tracks 25 minutes earlier. At the time of the accident, they were conducting regular maintenance, installing drainage systems and covering tracks to prevent the tracks from being frozen in the winter.

The train’s conductor told police that he stepped on the brakes quickly after he saw the workers 80 meters ahead, but the train hit them, running 200 meters from when the brakes were applied.

One of the survivors told police, “We began the work earlier than usual to finish it faster because of the cold weather.”

Korail said the workers failed to follow regulations and did not report to the control tower that they would enter the tracks earlier than scheduled. Because of the oversight, Korail said officials were not aware that they started work earlier.

All maintenance staff have keys to enter the tracks, Korail said, for greater efficiency, but it admitted that the workers had been accompanied by a supervisor and that the workers were not wearing full protective gear and had no access to any emergency shelters nearby.

A brother-in-law of one of the victims told local media yesterday, “It’s total nonsense that no one in the Korail office knew that a group of workers were on the tracks when the trains were still running.”

Asked why the workers couldn’t see or hear the oncoming train, Korail explained to police that they could have had their backs to the train or mistaken the train’s lights and horn with the cars on the highway that runs alongside the railway.

The Gyeyang Police Precinct in Incheon is now investigating whether Korail violated safety regulations or neglected properly supervising its workers.