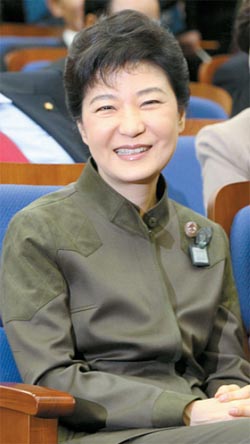 The Grand National Party yesterday took a first step toward pulling out of a downward spiral by allowing presidential front-runner Park Geun-hye to become an interim leader and take control of the party’s internal reforms.

Representative Park, former chairwoman of the GNP, made a rare appearance at a lawmakers’ caucus yesterday and declared that the ruling party will be free from factionalist strife ahead of the April legislative election.

The caucus - the third of its kind this week - opened yesterday morning as the ruling party struggled to find a way to reverse its plummeting popularity. Of the 169 lawmakers, 129 attended a discussion that lasted about 2 hours 40 minutes.

Following the meeting, the GNP’s standing national committee endorsed a plan to allow an emergency leadership headed by Park to guide reforms and the lead-up to the April legislative election. 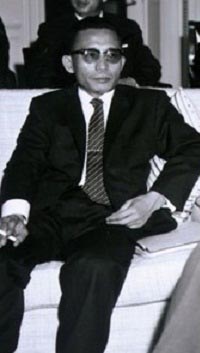 With the formal launch of the Park leadership scheduled for Monday, Park will return to heading the GNP five years and five month since she stepped down as chairwoman in June 2006.

At the caucus yesterday, Park’s first in two years and seven months, the daughter of former dictator Park Chung Hee said, “The most important thing for us now is how we can win back the public trust. We must unite and work hard together to achieve our best values.”

She continued: “We don’t have the luxury of time. The party’s fate depends on if we will be able to approach the people within a short period and attend to their needs, work to resolve hardships and stand alongside them.”

As a response to lawmakers who wanted to dissolve the party to start a new one, Park said sincerity is more important than mere surface changes.

“Changing the format is necessary, but the people make microscopic observations of party affairs through the Internet and social network services,” Park said. “If our genuineness is not recognized, the people will see no meaning in such a change.”

She also promised to reply to demands of some lawmakers that she declare the dissolution of her faction in the party. “When I said we should work together to achieve our best values, the problem of factional strife is included,” Park said. “I assure you that all matters will be covered when we work to [restore public trust].”

The confrontation between the Park faction and the Lee Myung-bak faction has been a long-running headache for the GNP, and Park appeared to be agreeing that mending the internal rupture and uniting the party are keys to competing with the increasingly united liberals in the legislative election.

At the caucus, two key members of the Park faction proposed that all of her supporters must stay out of the party’s leadership.

“The pro-Park faction must step back,” said Representative Choi Kyung-hwan, a key Park aide. “Now is the time for unity and harmony, not competition. We are heading for a presidential election, risking our fate, and factional strife is the last thing we need.”

Another Park loyalist, Representative Yoon Sang-hyun, agreed and appealed to two reformist lawmakers who quit the party to stay. “When the party truly changes, the two lawmakers will change their minds,” Yoon said. “When we unite, we will live, but when we disperse, we will die.”

Following the caucus, the GNP held a standing national committee yesterday and approved a revision to the party’s constitution to allow the establishment of the emergency leadership. The 15-member council, including the interim head, will have the same authority as the Supreme Council, and Park is to become the emergency leader.

For her appointment, the party changed the constitution provision that bars a presidential hopeful from holding party leadership posts 18 months ahead of a presidential election. The revision clears the way for Park to be in charge of the party while still running for president.

The emergency council will remain in charge of party affairs until a national convention elects a new head and Supreme Council. It allows the Park leadership to stay until the April legislative election.

The GNP has had no leadership since chairman Hong Joon-pyo and other members of the Supreme Council stepped down. The changes will be finalized by a national committee on Monday.