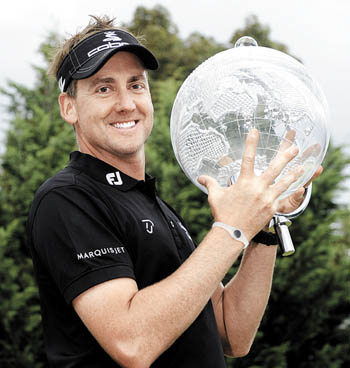 The much-anticipated final round shootout between the Briton and the Australian failed to materialize as Ogilvy surrendered his two-stroke overnight lead on the first hole and plunged to third after wilting with a bogey-strewn back nine.

“It was flawless, the whole day. I was very happy how I approached every shot, hit my targets,” the flamboyant Poulter told reporters with the tournament’s crystal globe trophy perched next to him.

“I love being in contention, that’s why I play this game of golf. If you’re down the field there’s no adrenalin, there’s no excitement, there’s no real interest.

“So that’s why I practice hard to put myself in this position to enjoy the fact of being under pressure because you find out who you are.”

Australia’s Marcus Fraser finished second after a scintillating 64 but was long in the clubhouse, leaving Ogilvy as the sole realistic hope of stemming Poulter’s victory charge.

Poulter, a model of composure throughout the tournament despite battling food poisoning on Friday and tricky winds over the weekend, threw down the gauntlet on the very first hole.

Landing his teeshot on the green of the driveable par-four, Poulter drilled a 15-foot putt for eagle to draw level with Ogilvy on 13-under.

The 35-year-old then piled on the pressure with birdies on the seventh and ninth holes to take a two-stroke lead, leaving Ogilvy scrambling.

On Saturday, the Australian had lit up Victoria Golf Club, where he had been a member since his junior days, with a course record equaling 63, but the magic deserted him as his approaches left him long, speculative putts that refused to drop.

Ogilvy grafted a pair of clutch putts to stay in touch in the middle stretches, but the pressure weighed on him as he conceded bogeys at 13 and 15 to go four down.

The Australian holed a long birdie putt on the 16th to briefly raise a slender hope, but Poulter slammed the door shut with a long birdie putt of his own to make the result a formality and add the tournament’s “golden jacket” to his colorful wardrobe.

The slumping loss left Ogilvy crestfallen and capped a disappointing year marred by injury and a winless season on the U.S. Tour.

“It has been a frustrating year,” a stony-faced Ogilvy said. “This is kind of how the year has gone, days like today.

“What are you going to do? I couldn’t really make a birdie all day.”

Poulter’s 269 total secured him a winner’s check of $180,000 and was his first tournament victory since beating Luke Donald in the World Match Play Championship final in Spain in May.

World No. 1 Donald capped his last week of golf for the year with a scratchy 1-over 72 to finish joint 12th with a total of 280, 11 behind Poulter.