Choi Jin-soo shakes up race for rookie of year

Choi Jin-soo shakes up race for rookie of year 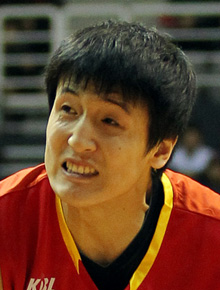 About a month ago, pundits predicted that the battle for the Korean Basketball League’s Rookie of the Year would be between Anyang Korea Ginseng Corporation’s center Oh Se-keun and Seoul SK Knights’ guard Kim Sun-hyung, both former Chung-Ang University teammates.

In fact, Oh and Kim were the only two rookies averaging more than 10 points per game a month ago and helped their teams to a good start.

However, with the league now passing the halfway point, Goyang Orions forward Choi Jin-soo is rising as a strong contender to break into the two-horse race.

Choi, 22, was already a high-profile rookie before the season began. The 202-centimeter (6-foot-4) forward is the youngest player ever to join the Korean national basketball team at just 17 years old.

In addition, Choi is the first Korean to play Division I for the National Collegiate Athletic Association.

He went to the U.S. in 2004 and graduated from South Kent School in Connecticut before being recruited by the University of Maryland.

But after experiencing high-level basketball in the NCAA, Choi decided to quit the Terrapins and come back to Korea in January 2010, saying playing basketball and taking academic classes at the same time was too difficult for him.

That was not the only downfall for Choi. Since the KBL rookie draft had already occurred when he arrived in Korea, Choi had to wait almost a year to play basketball again, training on his own.

He was finally drafted third by the Orions this January, behind the two top picks Oh and Kim.

But while Oh and Kim lived up to their names from the beginning of the season, Choi struggled.

In the first nine games, he averaged only 6.89 points per game, disappointing fans and coaches. Some fans even said Choi was overrated.

However, he gained his playing rhythm and bounced back.

Although his numbers are behind those of the two top rookies, and his team, the Orions, are sharing bottom place in the league with Seoul Samsung Thunders, fans are saying it is exciting to watch how Choi is playing.

“I was told that I should finish better when I’m in the air,” Choi said to Ilgan Sports, the JoongAng Ilbo’s daily sports newspaper. “In the United States, they told me not to step back.”

Depite his good performance, however, he emphasized he only cares about the team’s performance, saying that Oh and Kim have contributed to their team’s victories.

“I don’t usually express myself, but I really hate to lose,” Oh said. “Maybe I strengthened that part of my mind while I couldn’t play last year after dropping out of university.”

Choi said when forward Lee Dong-joon comes back from a wrist injury next week, the team will perform better and it will be big help for him as well.

Choi insisted that he is ready to play the support role for Lee who is believed to carry the attack of the Orions.

“Since we have different roles, our playing zone will not be the same,” Choi said. “I should be ready to fill the void of what is left after Lee’s attack.”

The Orions coach Choo Il-seung believes that Choi will be a superstar, not just for the Orions but for Korean basketball as a whole as his potential develops gradually with experience,

“Jin-soo has restored his confidence with experience,” Choo said. “He will be the next big man for Korean basketball.”