Can the center hold around Kim Jong-un?

Can the center hold around Kim Jong-un? 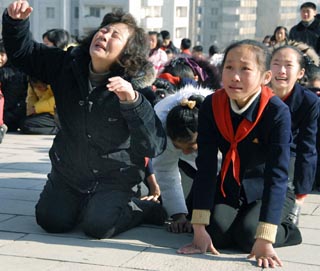 The unexpected death of North Korean leader Kim Jong-il only three years into a process of grooming his youngest son as his successor has raised uncertainty on the Korean Peninsula, with some observers warning of the regime’s collapse.

Whether Kim Jong-un, who is in his late 20s, can establish his authority is the biggest question mark, analysts said. The grooming of Kim Jong-un as a successor to his father was only three years in the making, compared to the 14 years of grooming enjoyed by Kim Jong-il, during which he managed to eliminate many rivals to power in purges, analysts said.

Chang Dal-joong, a Seoul National University professor, said at a special forum arranged by the JoongAng Ilbo yesterday that the top priority for Kim Jong-un is getting the North Korean military under control. Chang predicted that Kim would not be able to quickly seize control of the National Defense Commission, the North’s top decision-making body.

The North’s state-run Korean Central News Agency said yesterday the regime would maintain Kim Jong-il’s “military first” policy, which makes the military the number one priority in the country, after Kim’s death.

Moon Chung-in, another North Korea expert at the forum, said Kim Jong-un appears to have a certain level of protection from Kim Jong-il loyalists, including highly placed relatives, and would face few challenges to his power in the short term. The Yonsei University professor said economic policies will determine whether the North could meet Kim Jong-il’s goal of becoming a “strong and prosperous” country, and that will be a big factor in Kim Jong-un’s ultimate fate.

Another question was whether the North would make use of uncertainty following Kim Jong-il’s death to stage another attack like the shelling of the South Korean island of Yeonpyeong in November 2010.

Military analysts are split. Jong-un could try to boost his reputation as a military man by staging an attack, said some. But others said an attack would hurt him diplomatically on the world stage and reduce his maneuvering room, so an attack would come at too high a cost.

Military analysts said the North might have a contingency manual that stipulates policies in the case of the sudden death of a leader following Kim Il Sung’s unexpected death of a heart attack in 1994 and Kim Jong-il’s stroke in 2008. Kim Jong-un might be following that manual, they said.

Kim Yong-hyun, a Dongguk University professor, said China will try to keep the North from attacking the South to keep the peninsula stable.

Kim’s death could also nip recent progress in restarting of the six-party talks on denuclearization.