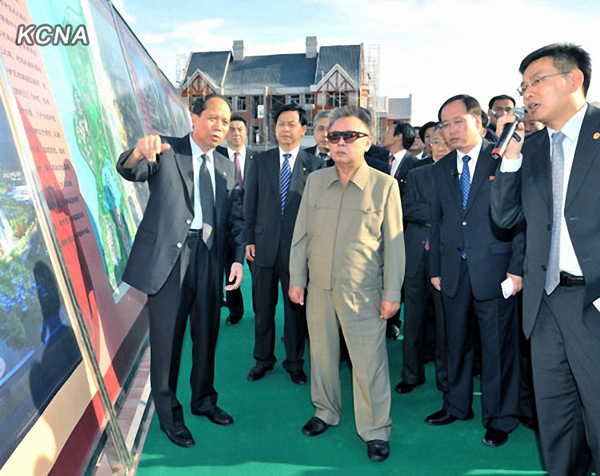 North Korean leader Kim Jong-il, who died on Saturday of a heart attack, takes a close look at a city plan for Daqing, in Heilongjiang, northern China, after visiting Russia. The North’s Korean Central News Agency unveiled 15 photos of Kim, like this one, on its Web site last month. [YONHAP] 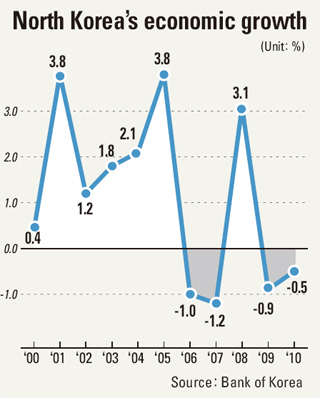 “The latest data shows that North Korea’s trade dependence on China accounts for more than 80 percent [of its total trade] and this tendency is likely to continue or deepen,” said Yoo Seung-kyung, a researcher at the LG Economic Research Institute.

“The North will try to increase its dependence on China to maintain stability in a very politically uncertain time in order to avoid chaos.”

However, Yoo said this extended reliance on China would probably just be a short-term measure to smooth over the transition of power as, from a long-term point of view, it could become a barrier to strengthening inter-Korean economic ties. 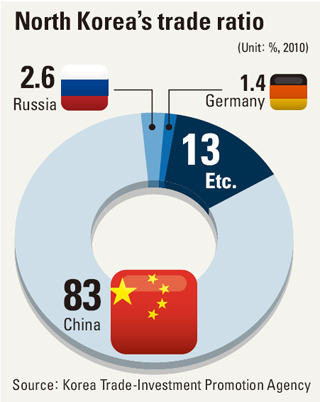 The North’s imports from its Communist neighbor and ally reached $2.28 billion in 2010, up 20.7 percent from the previous year.

Meanwhile, two-way trade is expected to reach a record high of $6 billion this year.

“North Korea’s trade dependence on China has grown in recent years,” said an official from Kotra.

“The increased sanctions imposed on North Korea by the international community have led the regime to increase its trade relations with its ally, China,” the official said.

“There are also other reasons for the increase, such as geographical benefits and the cost competitiveness of Chinese goods.”

The North’s top export items included mineral fuel and energy, clothing and steel, while the leading import items were boilers, machinery and consumer electronics, such as televisions, and passenger cars.

At the same time as the North has been leaning on China to bump up trade, however, the nation’s gross domestic product has been declining as it finds itself increasingly isolated from the outside world in the wake of on-again, off-again nuclear disarmament talks.

Based on figures released by the Bank of Korea, North Korea’s GDP dropped 0.5 percentage points last year from 2009, while South Korea’s economy grew 6.2 percent over the same period despite the global economic downturn.

In 2009, the North’s economy declined 0.9 percentage points and the South’s moved up 0.3 percent.

According to a recent study by the Korea Finance Corporation, North Korea’s trade volume dropped to $2.35 billion in 2009, marking a descent so steep it had not been experienced in over a decade.

The reclusive state’s trade deficit that year stood at $1.29 billion.

The corporation said that as part of efforts to offset the fall in trade with other nations, Pyongyang turned to Beijing.

Inter-Korean trade also fell almost 30 percent last year as the Lee Myung-bak government brought a halt to all business exchanges with the North in May, after the North’s suspected torpedo attack on the South Korean warship Cheonan that killed 46 sailors.

Japan has also halted economic ties with the North since 2003 based on its enhanced sanctions against the North’s nuclear programs.

“China will inevitably increase its influence on the North Korean economy under the Kim Jong-un regime, while the South will play a smaller role,” said Lee Young-hoon, a central bank researcher.

“Seoul should place more importance on what China represents for inter-Korean relations when drawing out its policies regarding the North.”

Economic relations between the two Koreas are widely considered to have dwindled under the Lee administration.

“The North seems to have shifted its focus to China instead,” said an official from the Ministry of Strategy and Finance.