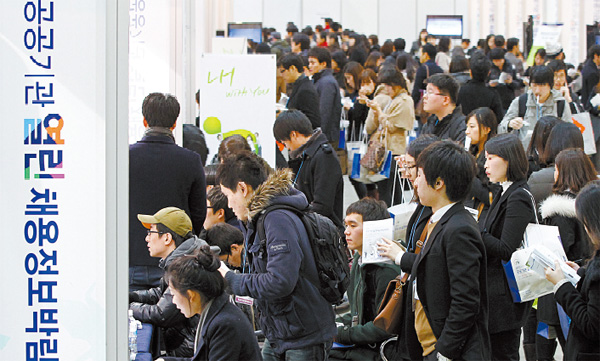 Twenty-four-year-old Hong Yeon-joo, who graduated from Shin Ansan University just over two years ago, was puzzled this week when she discovered that her age group was not the main target of a public job fair organized by the government.

The event, which took place on Monday and Tuesday, lured 18,000 job hunters as public institutions including the Korea Electric Power Corporation, the Industrial Bank of Korea and the Korea Tourism Organization set up booths offering information and counseling about jobs.

“Visiting a job fair is very helpful for job seekers,” Hong said. “However, I was surprised and concerned afterwards, because the government seemed to have focused the fair on laying out opportunities mostly for high school graduates, leaving no room for college grads like me.”

The event was held after the Ministry of Strategy and Finance announced its economic policy plans for next year. One of these will be expanding the percentage of high school graduate employees at public institutions from 5 percent to 20 percent from next year.

The announcement, made last week, was part of government efforts to increase employment opportunities for young people.

In response to the government’s aggressive efforts, of the total number of participants at the recent job fair, 1,280 visitors were high school graduates.“I heard that public institutions will be recruiting more people our age,” said Jung Myung-hee, a 17-year-old who was at the Korea Development Bank booth. “So I wanted to prepare in advance.”

“It’s really difficult to enter a public institution, even if you study at college,” said Choi Sang-hyun, an 18-year-old high school student. “I’m glad to get the opportunity to come here.”

A number of college graduates who participated in the job fair, however, expressed concern that the new policy seemed like a form of “reverse discrimination.”

“It’s a personal choice whether or not to enter university, but I can’t understand why the government is giving high school graduates more of a choice,” said Kim Jin-ah, a senior at Dankook University.

Despite the complaints, the government’s efforts come as the country has been facing huge levels of inflation in the education sector as well as high rates of unemployment.

According to Statistics Korea, labor market conditions for younger people aged between 15 and 29 are significantly bleaker than the national average. Their unemployment rate stood at 6.8 percent last month, a slight improvement from the 6.7 percent reported in October. The overall jobless rate in November was 2.9 percent.

“More than 80 percent of young people in Korea go to college, which is relatively high among Organization of Economic Cooperation and Development nations,” said Kim Hyun-soo, an official from the finance ministry.

“The rate is high because there is an overall perception that society treats university graduates better than high school students.”

Kim said that while the policy of picking high school graduates for one in five new positions at public institutions may come as a shock to those who have filtered though higher education without landing a job, “it is part of the process of transforming the employment landscape so that, at the end of the day, more jobs are created for all.