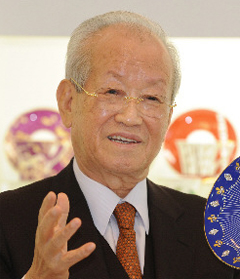 Britons are awaiting 2012 with excitement as they will celebrate the 60th anniversary of Queen Elizabeth II’s rule from June 2 to 5.

She is only the second British monarch after Queen Victoria to mark 60 years on the throne.

Hankook Chinaware CEO Kim Dong-soo is excited to be part of the event in the form of a diamond jubilee.

Hankook Chinaware, Korea’s largest tableware producer, was selected by the British monarchy as the official ceramic maker to mark the 60th anniversary of the accession of the queen.

In an interview with the JoongAng Ilbo on Dec. 14, Kim, 75, proudly showed a plate that’s adorned with shining Swarovski crystals with crown patterns.

“A set of mugs, a jewel box and a plate is adorned with a total of 400 Swarovski crystals,” Kim said. “Our artisans attached each crystal to each tableware by hand.”

Because being selected as an official souvenir of the diamond jubilee celebration is a rare occasion that comes only once or twice in a century, competition among international tableware companies was fierce.

While Royal Copenhagen of Denmark, Noritake of Japan and Wedgwood of the United Kingdom were among the competitors, it was Hankook Chinaware that won the honor.

“After examining our tableware, the British committee said ours are far different from other tableware they’ve been seen before,” Kim said.

“I guess our concept of the product - tableware that’s like jewels - appealed to the committee.”

The company will produce a 1,100-piece set for Prouna Queen’s diamond jubilee as a limited edition and only 100 pieces will be available in the Korean market.

Although each set is currently sold at 1.14 million won ($992) at department stores and Hankook Chinaware’s stores, the company said they’re getting orders from high-end customers who are eager to get rare items.

Prouna is a luxury tableware brand launched by Hankook Chinaware in 2003.

In 2007, the company released the Prouna Jewelry series which are adorned with Swarovski crystals. The series is popular among the wealthier people in Russia and the Middle East.

In April 2010, the Prouna brand products were officially launched at Harrods in London, after a buyer at the U.K. department store who saw the products approached the company about introducing the brand.