Kim was an average, meek middle school student in Seoul who studied hard and obeyed his parents. But a couple of years ago, he discovered an online game and really got into it - and soon it got into him.

He wasn’t supposed to play into the wee hours, and government restrictions don’t allow children under 16 to play online from midnight to 6:00 a.m. Kim would make pretend he went to bed and, when his parents were fast asleep, he’d log into the game using his mother’s account and play until dawn.

Exhausted during the day, he slept at school, and his grades declined. One day, his mother told him to stop playing the online game so much.

“You bitch!” the 15-year-old yelled, pulling a knife on his mother. “You can’t tell me what to do. I’ll play this game until feel like I’m satisfied!”

Kim had become an online game addict. And the game itself had started to change his character.

“The problem was the mother,” Bae Joo-mi, a clinical psychologist at Korea Youth Counseling Institute, told the Korea JoongAng Daily. “She allowed Kim to play games for one to two hours as a reward when he earned good academic scores. But eventually, the parent became the obstacle to playing the game.”

And one thing online games teach is how to remove obstacles.

“He acted like a game character,” Bae said, “that uses deadly weapons to get what it wants.”

The Dec. 20 suicide of a 13-year-old student surnamed Kwon in Daegu, who was bullied by his classmates, has brought nationwide attention to the issue of violence in schools. Kwon was bullied because of an online game called Maple Story. 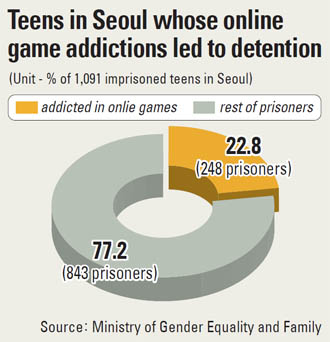 Two of his classmates forced him to play the game using their accounts to increase their performances and scores, and when their accounts were somehow hacked into, they blamed Kwon and took violent retribution on him.

Kwon jumped out of his apartment, leaving behind a poignant, four-page testimony of his sufferings.

Kwon’s tormentors forced him to play long and hard to increase their scores, and the rewards credited to their accounts.

Being under 16, Kwon was forbidden to play after midnight, but his suicide note said he played until 3 a.m. to 4 a.m. frequently.

“I’ve thought they were my friends,” Kwon wrote of his classmates in his suicide note. “But one day, I realized they’re my bosses - just like characters I’ve seen in an online game.”

“We can’t provide exact numbers, but it’s not hard to find bullying cases like Kwon’s that are related to online games,” Kim Byeong-gyu, an investigator with the Daegu police, told the Korea JoongAng Daily.

“There is role playing in this kind of bullying, which is like the role playing in the games they play. A stronger student plays the boss and forces the weak one to play for him. Those students who play the boss role sometimes become more aggressive and eventually commit a violent crime.”

According to recent research by the Ministry of Gender Equality and Family, about 250 (22.8 percent) out of a total of 1,091 Korean teenagers imprisoned in youth detention centers in Seoul were addicted to online games before they were charged for their crimes.

The ministry also said that a total of 877,000 Korean teenagers were addicted to online games as of March 2011. To deal with overplaying of online games by teenagers, the government put a ban on students under 16 playing online games from midnight to 6 a.m. The policy is currently in a grace period and will go into full effect Jan. 20.

If a game provider violates the law, the provider will be fined a maximum of 10 million won ($8,680) or sentenced to two years imprisonment.

But that ban has no effect on games based outside of Korea.

“No one knows that how much the policy has actually protected students from game addiction,” said Kim Seong-gon, an official at the Korea Association of Game Industry.

“Many teenage students are still able to find or play online games on overseas-based Web sites such as Facebook. The policy is merely giving a hard time to domestic game service providers.”

“It’s not hard to find or play other games that are not blocked by the government,” said Min Hoon-sang, a 12-year-old elementary school student in Jung District. “Some of my classmates who enjoy online games every day don’t even know about the existence of the restriction.”

Kim Dae-jin at the Catholic University of Korea Hospital said the ban might reduce the number of students playing online games but it’s not going to be an ultimate solution for game addiction.

The best way to prevent game addiction, Kim suggested, is for parents to pay attention to their kids and what they’re doing every day. “Parents should let their children know there are so many other things that they can enjoy, such as sports and music,” Kim said.

That’s what’s happening with 15-year-old Kim, who pulled a knife on his mother. Kim has been getting counseling at a center in Jung District.

Psychologist Bae said that Kim is participating in a new range of activities, such as basketball and guitar, and going through talk therapy in which a group of addicted students and their parents share their experiences.

“Kim sank into games in a period of just a couple of months,” Bae said. “But he has been trying to pull himself out of it for more than five months. He now realizes that there are so many things he can enjoy other than computer games.”