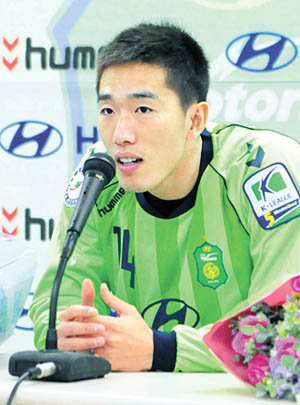 Details of Kim’s contract weren’t revealed, but sources say Kim will receive an annual salary worth around 1.5 billion won ($1.3 million), which would place him high on the list of Korea’s most-paid athletes.

“I am happy that I joined Jeonbuk, which is becoming a premier club not only in the K-League but also in Asia,” Kim said.

“I will put my best effort forward to lift Jeonbuk’s image and meet people’s expectations of me.”

Kim, originally a defensive midfielder, changed his position to striker during his stint with Sangju and had one of his best seasons in the K-League last year, netting 18 goals (15 from league games), the third-largest total in the league.

Nine years after his professional debut in 2003 with Ulsan Hyundai FC, Kim was considered the most-sought-after player among 160 free agents. 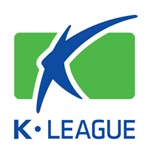 The midfielder said he is confident he will play well alongside the team’s veteran players, such as striker Lee Dong-gook, last year’s K-League MVP, and defensive midfielder Kim Sang-sik. Both previously played with Kim while they were in Seongnam.

“We had good memories while playing in Seongnam,” Kim said. “If we train and communicate together in the future, we will show a solid performance on the pitch.”

Kim, who has played 66 matches for the Korea national team, including the 2010 FIFA World Cup, also revealed that he wants to rejoin the national team squad, which is now led by former Jeonbuk coach Choi Kang-hee. Choi took the helm from Cho Kwang-rae last month.

Kim played his last match for Korea at the third round of Asian qualifiers for the 2014 FIFA World Cup against Kuwait in September. After damaging his knee ligaments on Sept. 25 in the K-League, he hasn’t returned to the national squad.

“It’s not that I wasn’t selected by Cho, but my own personal problems [prevented me from joining the national team],” Kim said. “Since Choi has become the coach, I need to work harder and find my place on the team.”

Kim will wear No. 14, which is the number he has sported at Bupyeong High School, Korea University and the Olympic team. The midfielder said he has made good memories and results while wearing the number.

Jeonbuk, the team with the strongest offense in the K-League with 71 goals in 32 matches last season, said that the addition of Kim will reinforce its firepower for upcoming season.

“Kim will be a key player in our midfield,” said Lee Heung-sil, Jeonbuk’s interim coach.