Into the blue with modern master Kim Whanki

Into the blue with modern master Kim Whanki


There are many old Korean words referring to different shades of blue. For example, jjokbit is an indigo blue, mulbit is a pale blue, banmul is like navy blue and gamparang is a dark blue with blackish tones. Our generation has forgotten these words and colors, which is a particular shame when considering the paintings of Kim Whanki (1913-74). Most of Kim’s paintings are in blue tones, but the beautiful, delicate blues in his paintings are too varied to say just “blue.”

Viewers will see these blues in an upcoming large-scale retrospective of the artist, one of the most important and most beloved in the history of Korean modern art.

The exhibition features about 60 oil paintings by Kim, including four that have never been unveiled to the public. It starts tomorrow at Gallery Hyundai in the art district east of Gyeongbok Palace in central Seoul. 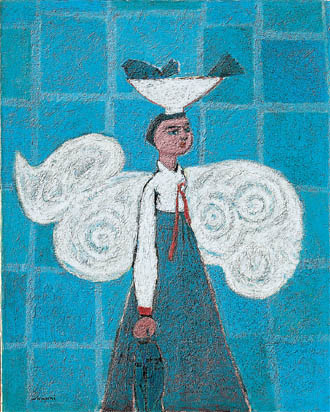 The paintings from the first era show various experiments by a young artist in the early stage of his career. The works from the Paris era and the second Seoul era are well-known half-abstract, half-figurative paintings featuring objects that frequently appeared in traditional Korean paintings, such as the moon, mountains, cranes and plum blossoms. “Moon jars,” which are plumpy white porcelain jars from the Joseon Dynasty, were the main subject of Kim’s paintings in those times.

“My father had many moon jars around him, and he liked them to be filled with clear water,” the artist’s daughter Kim Geum-ja, 76, told reporters at a press preview of the exhibition last week. “From time to time, he would stroke the jars tenderly.”

Gallery Hyundai, in a press release, quoted Choi Soon-woo (1916-84), a renowned art historian and former head of the National Museum of Korea, as saying, “He was a rare artist who created meot on broadened horizons and who lived his life with meot.”

Meot is a concept close to, but somewhat different from, beauty and has tones of coolness and elegance.

The gallery’s new building will show abstract paintings in blue tones on wide canvases that were created by Kim in New York from 1963 to his death in 1974. Though the figures of the traditional objects that appeared in his former paintings have gone, the various blues remain, yet these colors have a subtly different air from the blues in Western paintings. 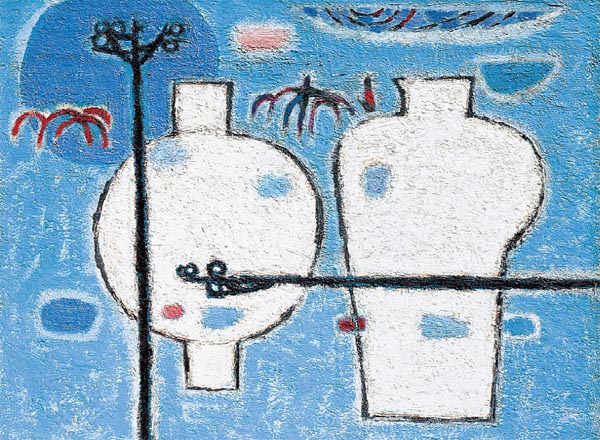 “Jars” (1955-56) is also part of the large-scale retrospective of Kim Whanki, one of the most important artists in the history of Korean modern art and the most beloved. Provided by Gallery Hyundai


Kim’s paintings from the 1970s were created with numerous dots, or “A Hundred Thousand Dots” of one painting. They will remind viewers of a magnificent universe and a sky full of stars and nebula. The artist painted the dots without any assistants, according to his daughter.

“I suddenly burst into tears when I saw the paintings and was reminded of my father’s earlier-than-expected death,” she said.