All-Star Game entertains fans on and off court

All-Star Game entertains fans on and off court 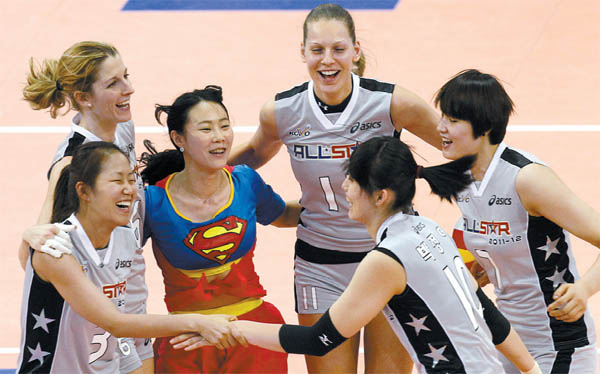 Members of the K-Star team, including libero Lim Myung-ok, who is dressed as Superwoman, celebrate during their V-League All-Star Game at Suwon Gymnasium in Suwon, Gyeonggi, yesterday. [YONHAP]

With some 7,112 fans packing the Suwon Gymnasium in Suwon, Gyeonggi, exceeding the gym’s capacity by more than 1,500, Kim, who played for the K-Star team, was voted the All-Star Game MVP in the men’s category, while Ukraine international Rykhliuk of the V-Star team captured the top honor for women. Both received 3 million won ($2,586).

“I’m very happy to win this award at this stage,” Kim said. “I consider this award to be from the fans and a sign that they want me to perform better in the future.”

This was the first time that the Korean Volleyball Federation (KOVO) hosted an All-Star Game with players from both the men’s and women’s leagues, and it turned out to be one of the most exciting All-Star Games to date.

A total of 48 players, who were selected to play via an online fan vote and recommendations from a KOVO committee of experts, were divided into the K-Star and V-Star teams to play the four-set match.

Female players competed in sets one and three while male players played in sets two and four, with the winner determined by the most points in the combined four sets.

But the All-Star Game wasn’t just about who was winning or how many points were scored. There were plenty of fun events, special ceremonies and humorous performances to rock the crowd for the five-hour event.

In fact, the match itself originally ended in a draw as both teams collected 70 points. The K-Star team won sets two (25-22) and three (15-8), while the V-Star team won sets one (25-18) and four (15-12). But as a cannon salute had already been fired to signal the closing of the match, the winner was decided with a coin toss and it was the K-Star team that won.

The event started out with fans teaming up with their favorite volleyball players to compete in a fun run over an obstacle course.

The event then started to heat up when the coaches of the V-League clubs took to the court in a special nine-man match in which players directed from the sidelines and acted as referees.

The main event itself was as much fun off the court as it was on, as players such as Cheonan Hyundai Skywalkers’ Dallas Soonias, who was named the most entertaining player of the game, had some fun with spectators by acting as cameramen and cleaners as they moved around the gymnasium. Fans were even pushed onto the court as some of the more mischievous players took their seats.

The liberos of each team wore Spider-Man, Batman and Wonder Woman costumes, with some donning Bruce Lee’s trademark yellow suit.

“It was very fun out there,” said Croatian attacker Mia Jerkov of the Incheon Heungkuk Life Pink Spiders.