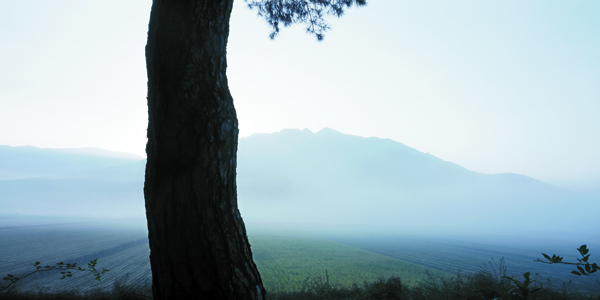 The photograph of the pine tree in Hamyang, South Gyeongsang, that Bae took in 2007.

It was 2007 in Hamyang, South Gyeongsang, and photographer Bae Bien-u had hit the road at daybreak as he had for the past several days, on his way to his favorite pine tree. He wanted a perfect shot at the moment the sun rose, as fog filtered in and sunlight streamed down onto the tree. It wasn’t going to be easy to get what he wanted, but he couldn’t quit. When he arrived at the site, he couldn’t help sighing because it looked like nature wasn’t going to cooperate. But just as he was about to turn away, a fog began its approach. Soon, the neighborhood was covered in a thick blanket and Bae instinctively began pressing the shutter. Three minutes later, it was as if the fog had never been there. It was a moment of a lifetime and he knew he would never get it back. The photo has become one of Bae’s signature pieces.

The 62-year-old photographer is best known for his images of pine trees. His works are installed in galleries and museums around the world from Japan to Germany. Elton John bought a work of his seven years ago and when U.S. President Barack Obama visited Seoul in 2009, the Korean government gave him a photo collection by Bae.

“Taking photos is like keeping a diary for me,” he said in a recent interview at his atelier at Heyri artist village in Paju, Gyeonggi. “But I can capture the best moments only when I’m warmed up.”

He added that he felt he had only had a couple of memorable moments in his 30-year career.

He served coffee and put out bottle of wine even though the interview took place in the middle of the day. The wine was from a German maker but bore a label decorated with a pine tree. He explained that he began drinking the wine when he was in his 30s and now has a special contract with the winery to import a certain amount without the winery’s label. That seemed a good place to start the interview.

Q. Even your wine has pine trees on the label.

A. Isn’t that supposed to be my signature? I’ve been photographing pine trees since 1983.

I was born and raised in Yeosu, South Jeolla. I’ve been painting the ocean for a long time and have been taking photos of it since the moment I obtained a camera. The ocean is a universal object. But I began thinking about what could be a symbol for Koreans and thought about pine trees. I didn’t choose them because they were irresistible or anything, though.

When I initially got into photographing pine trees, Yoo Duk-hyung, the president of Seoul Institute of the Arts, praised my work. He said when he was producing theater in New York, the works with Korean elements were best. It was a while before I started searching for the answer to the question of what makes pine trees Korean. I was looking at paintings by Jeong Seon [a Joseon-era painter renowned for his landscapes] and realized that pine trees are everywhere - in the house, at tombs; even coffins were made of pine trees.

It took a while for your works to become popular.

That’s true. Until the early 1990s, my photographs were mocked in Korea because experimental works were in fashion. Koo Bohnchang and Kim Jung-man were much more popular, though they were simply following the trend overseas. What’s funny is that both are doing landscapes now.

Don’t you ever get tired of pine trees?

But people still keep buying them. I’m running out of stock. [Laughs.]

I’ve asked Europeans the same question. Someone once told me about this myth about fairies living in a forest or something. They say they can feel the spirit of the forest in my photos. But the more direct reason my work is popular nowadays is global warming. The United Nations designated the year 2011 the “International Year of Forests” so I received a lot of offers for commercial work. I only accepted one - a collaboration with Samsonite - because as a person who spends more than two thirds of a year traveling I was attracted to the idea of unique luggage. Samsonite made 1,200 suitcases with my photos of pine trees on them.

How well do your photos sell?

I can live for a year with what I earn selling 10 pieces.

Have the prices gone up?

Do you have more customers from abroad than in Korea?

Foreign collectors account for 60 percent and my works are more expensive abroad.

What led you to spell your name “Bae Bien-u”? That doesn’t follow the Revised Romanization rules. 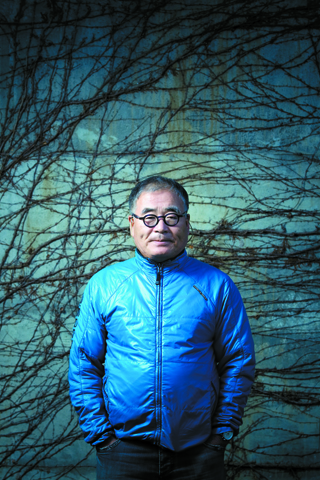 A linguist friend of mine told me 20 years ago that if I wanted to become world famous, my name should not be long. Even if I followed the Romanization rules, nobody would say my name exactly the way Koreans pronounce it. So he advised me to mix languages. “Bien” means “good” in Spanish and French and in German it is pronounced the same as my Korean name. That probably helped sales of my works in Spain and France because I see a lot of collectors from those countries.

What advice do you usually give your students?

I always remind them that the camera is merely a tool. What you have inside your heart matters most. You need to develop something of your own. I have come this far because I started drawing trees when I was a freshman in elementary school. Ansel Adams, the American photographer and environmentalist, was originally a composer, while Sandy Skoglund, renowned for “Radioactive Cats,” was a sculptor. Sebastian Salgado, the Brazilian documentary photographer, was an economist who researched the third world. Without any expertise in any field, you can never be competitive. It’s a shame that photographers Koo Bohnchang and Kim Jung-man have abruptly changed their styles. If they had continued taking pictures of people, they could have had many important Korean figures as subjects. Both are over 60. Why would they start doing landscape photography now?

Are there any young photographers capable of succeeding you?

Not yet. But I’m tired of seeing only three photographers in the media - myself, Koo and Kim. I also think the media is somewhat responsible because it doesn’t support young artists. Nowadays I see many young photographers studying abroad, but it may not be entirely for the sake of their art. When you learn someone else’s style, you are at risk of losing your own. Of course it would be better if you could overcome that limitation.

What makes a photographer good?

Well, Dong Qichang [a Chinese painter, scholar and calligrapher from the late Ming Dynasty period] said artists are born. But he also said that if you read 10,000 books and travel 10,000 ri [4,000 kilometers], you can be one, too.

I’ve traveled around Korea to see the bodies of water surrounding the nation. In my 30s I crisscrossed the Mediterranean. But I’ve realized that Korea’s southern coast is much more beautiful than any other. I want to promote the beauty of the southern coast. First, I plan to hold a large-scale exhibition about Jeju Island in about three years. Then I will travel along the southern coast. It’s probably something I won’t be able to finish until the day I die.
What matters most to you?

Work. When you are good at your work, you get everything from money to female fans. Exerting effort to excel in something revitalizes your life. Whenever I spend a couple of days drinking in Seoul, this thought that I am not supposed to be doing this hits me. Happiness is enjoying nature as it is.

* 1974: Graduated from Hongik University with a bachelor’s degree in applied arts

* 1981 to present: Professor of photography at Seoul Institute of the Arts

* 1982 to present: Held numerous exhibitions with the first at Kwanhoon Gallery

* 2009: Honored with Ok-gwan Order of Merit for Culture from the Ministry of Culture, Sports and Tourism