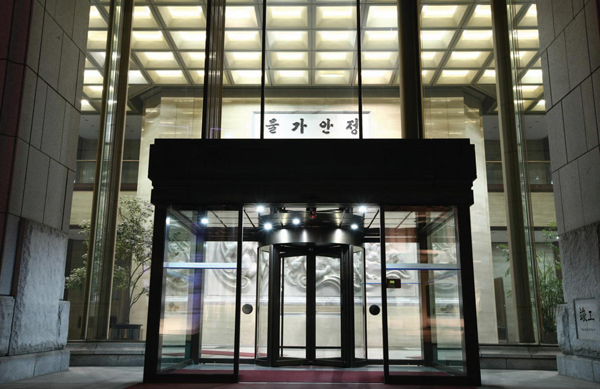 Like many homemakers her age, Kim Young-mee is battling rising inflation and harboring serious doubts about the government’s claim that it is starting to get a grip on rising consumer prices.

“Last year, our monthly grocery bill was under 400,000 won [$348], but this year, the amount I spend on a single trip to the supermarket seems to match that amount,” said the 35-year-old mother of two. “As my husband’s salary hasn’t gone up, we decided we had to cut back our spending significantly, even on essentials.”

Consumers like Kim say they find it hard to believe consumer prices have only risen by around 4 percent in the last 12 months, as the government announced recently after setting a target band of 2 percent to 4 percent for 2011.

As households increasingly feel the pinch, scrolls like the one hanging in the lobby of the Bank of Korea’s headquarters in central Seoul seem more out of touch with reality than ever. The scroll, more like a mantra, reads simply, “Mulga Anjeong” (“Consumer price stability”).

“The government says that inflation only grew by 4 percent, but to me that sounds like utter nonsense,” Kim said. “Maybe officials need to head to their local supermarket more often, like the rest of us. Then they would see the real situation.”

The government, which implemented a revised system of measuring the consumer price index last October that effectively lowered the rate of inflation for the whole year, and the Bank of Korea have been accused of disguising the actual burden faced by most consumers.

This merely added to the public’s sense of frustration at the Lee Myung-bak administration’s obsession with numbers and statistics - an infatuation that began in 2008 when Lee took office - that seemingly bend to their will, while not always accurately reflecting the reality on the ground.

Last year, the government said it was amending the way the CPI was calculated to better reflect consumer spending patterns. Gold prices were removed, as were landline fees and pay phone prices. Spending on smartphones and Internet bills were added.

Seoul stressed that such changes are typically made every five years, dismissing speculation that the move was a ploy to artificially lower the recorded rate of inflation.

But one illustration of the discrepancy came in August, before the new system took effect, when the CPI flew past 5 percent to mark the highest on-year increase in three years.

The government said it expected the changes to lower the final figure by 0.2 percentage points.

This sparked controversy and raised speculation that the government was trying to distort reality. In fact, after the revised index was announced, the average rate between January and October inched down 0.4 percentage points from the previous system, with the exclusion of gold rings and other accessories making up a large chunk of the difference. Gold ring prices shot up more than 24 percent last year as international gold prices soared.

At the time, Woo Ki-jong, head of Statistics Korea, said, “If you look at the international standard, excluding gold rings [the decision to revise the CPI] was actually made later than it should have been. The fact that removing gold rings from the index lowered the final figure by 0.25 percentage points shows how one product was able to distort the entire index.”

One central bank official said the CPI was more affected by changes in people’s salaries over the last five years, and also the way they choose to spend their money.

“The change in the CPI measurement system is not a one-time event to manipulate consumers into thinking that inflation has eased,” the official said. “If these changes were not made, it could have caused negative side effects, such as monetary policy decisions based on [a falsely inflated] inflation rate.”

The official said the disparity that consumers are feeling is largely due to the surging prices of daily necessities, which he claimed are disproportionately high.

“The CPI includes a wide range of services and goods, but when it comes to daily living, consumers are particularly sensitive to price changes in essentials,” he said. “Even if inflation grew at a lower rate, consumers react sensitively whenever there is a slight change to the cost of daily goods - as though their entire living conditions have gone to pieces.”

Food prices have been heavily affected by changes to agricultural and livestock goods, which rose by over 9 percent last year. In contrast, manufactured products and services grew 4.9 percent and 2.7 percent, respectively.

According to a report released by the Organization of Economic Cooperation and Development (OECD) this month, food and beverage prices rose in Korea by the second-highest amount in the OECD during the first 11 months of 2011, beating the average of 3.7 percent posted by 32 of the body’s member nations.

The situation could worsen for domestic households as the nation’s economic outlook dimmed last weekend when the credit ratings of nine European economies, including France, were downgraded by Standard & Poor’s.

According to a recent survey by the Korea Chamber of Commerce and Industry (KCCI), the majority of housewives in the Seoul metropolitan area have no plans to increase their spending for the Lunar New Year holiday, a three-day affair that officially begins on Sunday.

Out of the 600 women surveyed, 40 percent said they will cut back on their spending, while 51.9 percent intended to match last year’s expenditure. Nearly half cited rising consumer prices and 27.9 percent blamed a fall in income.

“Revitalizing consumer spending is a pressing concern” that can only be achieved by stabilizing consumer prices, creating new jobs and improving free competition among companies, said Kim Moo-young, a senior executive at GS1 Korea, the logistics and distribution promotion subsidiary of the KCCI.

Rising consumer prices have weighed especially heavily on lower-income families. In the first nine months of last year, food and beverages accounted for 20.5 percent of the total expenditure of households in the lower 20 percent income bracket, but only 11.5 percent of the top 20 percent.

“Last year’s consumer prices grew at the fastest pace since 2008, and as the cost of daily necessities has surged, lower-income families have struggled,” said Shin Chang-mock, a researcher at Samsung Economic Research Institute.

“There are even concerns that the economy will see low growth momentum for an extensive period, and that it could be some time before it recovers to a pre-crisis level of growth,” he said.

According to a report by the central bank, inflation exceeded 4 percent for six of 12 months last year, fueled mostly by supply factors such as rising international oil prices. Under the previous system, it surpassed the government’s target for 11 months and stood at 3.9 percent in September.

“I have to agree that the government is fixated with numbers,” said Korea University Professor Lee Phil-sang. “The central bank’s inflation target is based on a 2005 index, but they changed the system at the end of last year as consumer price growth exceeded the upper limit of their target.

“Because of this gap between what the government is saying and what people are actually feeling, the public feels as though they are being deceived.”

With a general election due in April and presidential elections scheduled for December, taming inflation has become even more of a hot-button issue for the government this year than last. President Lee announced during his first cabinet meeting of the year that he would pursue tougher measures to put a lid on spiraling prices of daily goods, with a focus on agricultural and livestock products.

Lee drew attention to the fact that in Korea Napa cabbage prices rose above 15,000 won last. “I don’t know anywhere else in the world where a cabbage sells for [that much].”

Citing the need for a system where high-ranking officials at the Ministry for Food, Agriculture, Forestry and Fisheries are held accountable for consumer prices, he said, “No one has taken full responsibility when the price of essential goods like Napa cabbages has shot up. .?.?. This issue needs to be dealt with [properly].”

Since 2008, the government has been monitoring and managing the prices of 52 products, including gochujang (chilli paste). These were named “MB” consumer prices after the president’s initials. Seoul added another 10 items to the list last year, dubbing these “New MB” consumer prices.

“By controlling prices, the government is able to lower them in the immediate future to make the situation appear more palatable to the public,” said Professor Lee. “But eventually .?.?. the monitoring system loosens and the prices shoot back up even higher.

“From the get-go, the government has focused its policy too much on economic growth, which included keeping the Korean won weaker than the U.S. dollar,” Lee said. “This may have improved Korea’s export conditions and helped the nation grow in the global market, but it has had the side effect of worsening people’s living conditions as consumer prices have grown.”

Meanwhile, the central bank has taken flak for failing to tighten its monetary policy when it had the chance and allowing excessive liquidity in the market to drive up consumer prices.

As economic uncertainties continue to build up, market observers expect the bank to further lower the nation’s borrowing rate this year.

“It is clear that rates are not expected to normalize anytime soon. Governor Kim Choong-soo stated that the central bank will resume its normalization process if inflation becomes ‘chronic.’ But given that it expects inflation pressure from demand to ease, and the CPI is targeted at roughly 3 percent, this suggests that any rate hikes are now off the table,” said Ronald Man, an economist at HSBC. “Therefore, we maintain our view that the Bank of Korea provide a little boost to the economy by cutting its policy rate by 25 basis points to 3 percent by the end of first quarter 2012.”