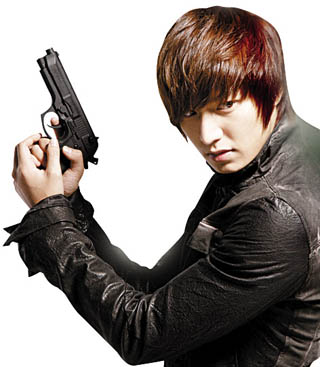 Hallyu star Lee Min-ho starred in the Chinese television program "Que Rak Dae Bon Young" (“Happy Camp”), which aired on Jan. 14. The special-edition show dedicated to the Korean actor received the highest viewer rating in the last two years and one of the top 10 ratings ever by a program in China.

Usually a 60-minute show featuring a special guest, “Que Rak Dae Bon Young” was awarded a lengthy 90-minute timeslot that received a 2.65 percent viewers’ rating and chalked up a market-share of 6.49 percent.

The live program was also accessed online by some 10 million viewers. In 2011, the final episode of the most watched Chinese drama achieved 1.93 percent viewers’ rating. Thus Lee’s achievement can be seen as a phenomenal achievement.

The producer of “Que Rak Dae Bon Young” took to his personal social networking account after the show to say, “6.49% of people watching television tonight was watching our show! Thanks to Lee Min-ho we are No. 1.”

Netizens were quick with praise after the show: “Lee Min-ho is perfect!” “My mom thought I was mad because I screamed out loud when Lee Min-ho appeared.”