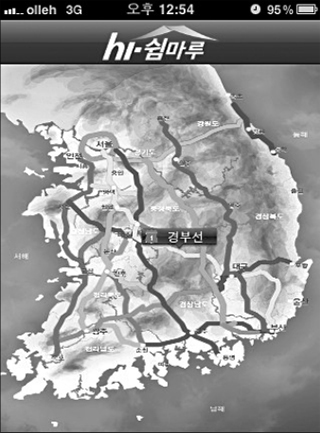 An app called hi-shuimmaru provides information on rest stops and restaurants along the highways.

Korea’s second most important holiday will start as early as today as many Seoul and Gyeonggi residents pack up for trips to their hometowns and families.

According to the Ministry of Land, Transport and Maritime Affairs, over 31 million people are expected to travel in cars, buses, trains and planes.

With more than 20 million people now owning smartphones, here are some applications that could come in handy during the holidays. They are all free, in Korean and available for Android and iPhone.

The Korea Expressway Corp. has two separate apps that will help those driving home. A rest stop app offers information on nearby rest stops and gas stations, including the level of service available and menus.

A traffic information app has maps and also shows the traffic situation in real time. It has a guide that shows the fastest route depending on the traffic.

A quick bite at rest stop is an even better option with the I’m in a Hot Spot app by KTH. It offers descriptions, photos and even reviews of restaurants by previous diners.

On Lunar New Year or on Chuseok, remembering how to set up the table for ancestral rituals is never easy. The 2011 Charaesang Charigi (or How to Set the Ancestral Table) shows the items that should be placed on the table and exactly how to place them. It also shows the order of the ritual process.

Lunar New Year isn’t complete without traditional games. Here’s where the game Bok Yutnori comes in handy. Yut is a Korean board game in which you toss four wooden sticks and move around a board depending on how the sticks land. If grandma mislaid the Yut sticks, just pull out your smartphone, toss it, and the sticks on the screen jump and land just like the real ones do.