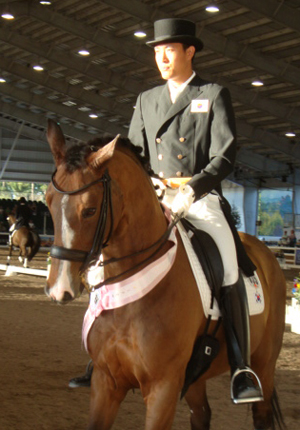 At the Jim Brandon Equestrian Center in West Palm Beach, Florida, Kim, 22, took third in the FEI Olympic Grand Prix Special (CDI3) at the Wellington Classic Sunshine Challenge after scoring a 65.022 percent. Canadian Ashely Holzer topped the class with 70.067 percent and Tinne Vilhelmson-Silfven of Sweden was the runner-up at 68.178 percent.

For Kim, the finish was not just a personal best, but also a historic one placing his name at the top of Korea dressage greats.

Previously Seo Jeong-gyun, who is currently manager of Hanwha Galleria where Kim is affiliated, had finished sixth at the Aachen Grand Prix CDI in 1988.

Local dressage pundits say Kim’s performance is encouraging for Korea’s equestrian field as the sport is dominated by Europeans and Americans.

Kim, who is the third son of Hanwha Group Chairman Kim Seung-youn, is an Olympic hopeful representing Korea in the sport. In fact, he was picked as a national team member at just 17 years of age, becoming the youngest national rider in team history.

But while some worried about his lack of experience, Kim contributed to Korea’s gold medal in the team dressage competition during the 2006 Doha Asian Games and four years later played an integral part in another gold-medal run at the Guangzhou Asian Games.

Pundits say the 187-centimeter-tall Kim has a fitting physique for the sport. For dressage, those who have long legs are better equipped to control horses.

Kim, an undergraduate who is studying geography at Dartmouth College, had previously stated that his future goal is to earn a gold medal at the Olympics, which Koreans have never done before.

For this year’s Summer Olympics, Korea has already failed to qualify for the London Games as Australia and New Zealand were able to capture the two tickets allotted. However, the pass for the individual competition is still up for grabs - although only one spot is available.

Koreans are expected to have tough road in order to qualify for the Olympics, with Japan and Malaysia both in Group G.

Kim, the rider of Bukowski, the horse he bought last November, will take part in international dressage events that are sanctioned by the FEI until the end of February. His team, Hanwha Galleria, said the Korean is working hard in Florida to gear up for the spring stretch.

“We’re preparing our best to get the passes to the London Olympics,” Kim’s manager Seo said.