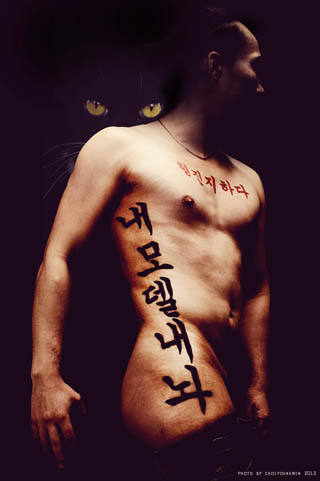 After a gal uploaded a buxom photo of herself in a bikini demanding the release of a former opposition lawmaker in jail, a guy posted portraits of himself in the buff on the lawmaker’s Web site.

The artful pose and lighting obscured Choe’s private parts. Like the girl before him, Choe painted messages on his body calling for Chung’s release.

Choe works for Chung as a photographer, posting photos of the former lawmaker on his official Web site.

Chung, who is one of the hosts of the popular liberal podcast “Naneun Ggomsuda” (I’m a Petty-Minded Creep), was sentenced in December to one year in prison for spreading false rumors about President Lee Myung-bak. The podcast specializes in potshots at the president, and its name is supposed to refer to him.

Four women have now uploaded photos of themselves scantily dressed in support of Chung. When other hosts offered raunchy encouragement of the trend, they were criticized for being sexist and sophomoric.

A message in Korean drawn down Choe’s torso reads: “Bring back my model.” Another on his chest reads: “I am serious.”

“I voluntarily took the nude pictures as a male supporter in response to people who said the woman in the bikini was exploiting femininity,” Choe told local media. “So far, many people have made solo protests about Chung’s jailing by standing with a banner in Gwanghwamun Plaza in central Seoul, which didn’t attract any attention. I don’t say that that kind of protest is bad, but I felt sorry to hear protests [about the woman in the bikini].”

Choe also posted a note on the Web site that read: “Why did you arrest my model, forcing me to take pictures of myself?”

The hosts of “Naneun Ggomsuda” haven’t officially commented on the controversy over the saucy protest or their encouragement of them, even in a podcast released Wednesday.

“Wednesday’s broadcast was recorded on Jan. 27 and we didn’t know anything about the controversy over the bikini support at the time,” Kim Ou-joon, a member of the show told the JoongAng Ilbo yesterday.

“How they deal with this problem will show their level of maturity,” said Chohan Hae-jeong, a sociology professor at Yonsei University and a prominent feminist.