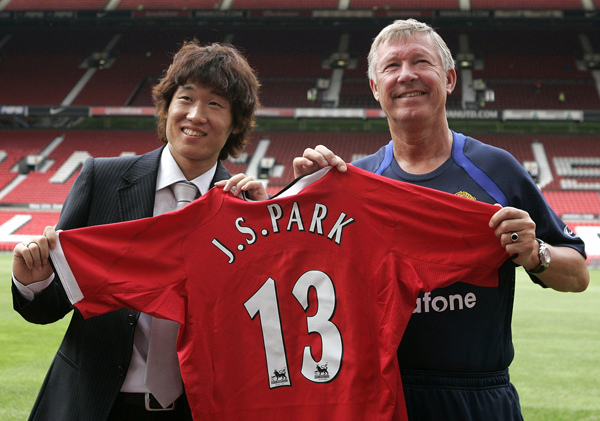 
Park Ji-sung has played his 200th game for Manchester United. The 31-year-old Korean came off the bench in the 86th minute against Chelsea during Sunday’s English Premier League match, becoming the 92nd United player to reach the milestone.

Park played his usual style during the final minutes of the dramatic 3-3 stalemate at Stamford Bridge in London, running throughout the pitch and finding open spaces with his seemingly never-ending endurance.

“It’s unbelievable. I never thought I could play for United 200 times,” Park said on MUTV after the match.

To be honest, I also never thought he could have played this many games.

Park joined United from Dutch giant PSV Eindhoven in July of 2005. His debut game was on Aug. 10 of that year, when United faced Debrecen VSC of Hungary in the third qualifying round of the UEFA Champions League at Old Trafford. The Korean notched his first goal for United on Dec. 21, 2005, against Birmingham City in the Carling Cup quarterfinals.

While Park played with United during his first season in the EPL, I didn’t expect he would survive long in arguably the world’s most physical league, especially with a club as prestigious as United.

He was injury-prone at Eindhoven, and I figured he could be run down in a league that is notorious for its aggressive play, potentially ending up as a career bench-warmer - a story more familiar to the likes of Park Chu-young, currently with Arsenal.

However, over seven seasons, Park has proven me wrong. In fact, the former Korean national team captain has shown that he can not only succeed in the EPL, but also enlighten the football world that Asian players are capable of big things with big clubs.

With United, Park has so far won a total of nine trophies: four Premier League titles, one UEFA Champions League, one FIFA Club World Cup and three Carling Cups. In 200 games, the midfielder has scored 27 goals and tallied 26 assists.

But Park’s contribution to the game is often not reflected in his statistics. He is not a prolific goal scorer like the Ruud van Nistelrooys or Thierry Henrys, instead working behind the scenes, doing the dirty work for the star players by making himself available and drawing defenders away by using his lung-busting endurance. As the old saying goes, you need someone to move the piano before a pianist performs.

As I remember it, Sir Alex Ferguson, Manchester United’s manager since 1986, once praised Park’s ability to cover and penetrate open space as “exceptional.”

Compared to his early days, Park’s aggressive style has grown milder, but his understanding of tactics and unwavering commitment to the team exemplifies his role as a true United veteran.

What has brought Park this far, in addition to his athleticism, is his strong mentality. Steve Bruce, former captain of United who played more than 300 games under Ferguson, told me last October that Park’s success comes from his understanding of Ferguson’s philosophy.

The former Sunderland manager said that the reason why Park has been able to last this long in the EPL is that he embraces a winner’s spirit, fighting until the last moment.

The Korean will have to say farewell to football in the near future. And one day, a Korean footballer may record better statics.

But I hope statistics don’t mislead anyone as to Park’s contribution to United’s recent success and to football in general. Park is a player who has shown, and continues to show, more than just goals or assists on the pitch and that is the reason he still wears the United shirt to this day.