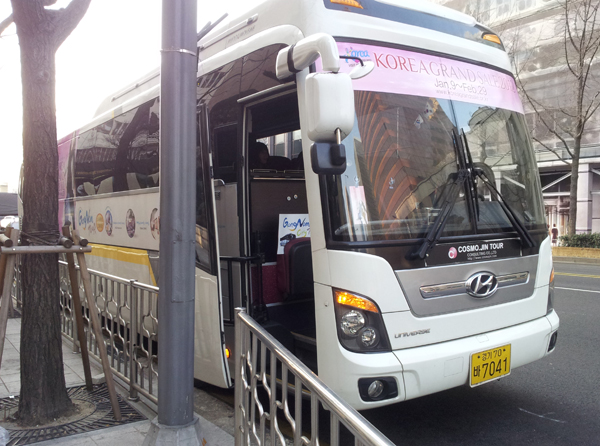 During Korea Grand Sale 2012, a free shuttle bus will operate between Gangnam and Gangbuk Districts three times a day. The bus will depart from Lotte Hotel in Sogong-dong and will stop at Myeong-dong, Dongdaemun, Garosugil, Apgujeong, Cheongdam Fashion Street, Bongeunsa Temple and COEX.


The Visit Korea Committee is conducting various promotions to attract shoppers to Gangnam District as the area attracts less people than Gangbuk District.

The committee is making a special effort during the “Korea Grand Sale 2012” by providing a free shuttle bus that will operate between the two areas three times a day on Tuesday, Thursday and Saturday at 9:40 a.m., 1 p.m. and 4 p.m. The bus will depart from Lotte Hotel in Sogong-dong and will stop at Myeong-dong, Dongdaemun, Garosugil, Apgujeong, Cheongdam Fashion Street, Bongeunsa Temple and COEX.

Cheongdam-dong’s luxury brand road, a popular spot for shoppers, has become a “street of lights” with the installation of 58 LED curtains. The 1,370-meter street from Cheongdam crossroads to the Galleria Department store, is lined with world famous luxury brands and is becoming a popular stop for Chinese and Japanese tourists.

The Visit Korea Committee has actively promoted Gangnam District to foreigners with the support of Hyundai Department Store’s Apgujeong branch, that is offering a wedding package worth 10 million won ($8,900) as a prize for shoppers at the department store from Feb. 3 to 5.

At Lotte Department Store’s main branch there was a drawing of personal items from Hallyu stars, as well as a photography exhibition called “Time of Communication,” and on Feb. 9 at Shinsegae Department Store’s main branch the “2012 Performance Gala Show” will show scenes from the nonverbal show Nanta “Bibap” and the musical “Kung.” There is also a scratch lottery event and a gift drawing event with flight tickets, hotel accommodations and a Korea pass as presents.

The Korea Grand Sale 2012 is hosted by the Visit Korea Committee and is supported by the Ministry of Culture, Sports and Tourism.