Ivory Coast, Zambia to meet in the African Cup

Ivory Coast, Zambia to meet in the African Cup 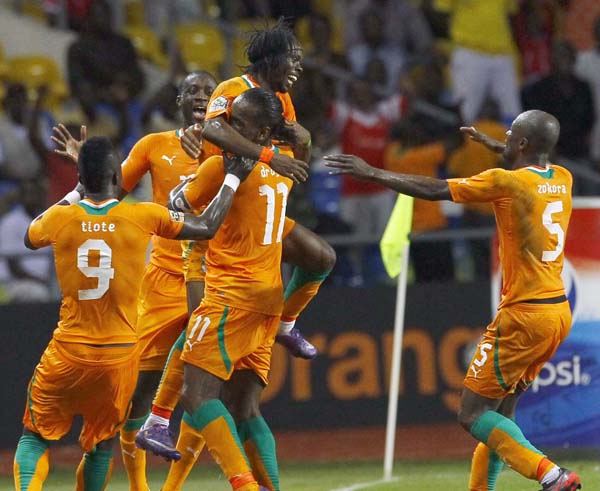 
LIBREVILLE, Gabon - Pretournament favorite Ivory Coast will play Zambia in the final of the African Cup of Nations after another surprise on Wednesday raised the possibility of one more major shock in the last game.

Ivory Coast’s stars forced their way through with a solo goal from Arsenal forward Gervinho to beat Mali 1-0 in the semifinal in Libreville. But they will not face Ghana, as everyone expected, in Sunday’s showpiece.

Zambia survived an early penalty miss from Ghana’s Asamoah Gyan and soaked up pressure to beat the four-time champions through a 78th-minute winner from substitute Emmanuel Mayuka in Bata.

Mighty Ivory Coast against little-known Zambia now perfectly reflects a tournament in which the top teams have been harried throughout by the underdogs.

The final at Stade de l’Amitie will also be rich in poignant history as Zambia returns to the Gabonese capital for its third attempt at winning a final, 19 years after a tragic plane crash off the coast of Libreville robbed it of an entire team in its worst sporting disaster.

Zambia - which has twice finished runner-up - last appeared in the final in 1994, the year after its team was wiped out in the accident. It rode a wave of emotion to get to the decider with a makeshift squad but lost 2-1 to Nigeria.

“The last final Zambia played was in 1994 with a reserve team, because all the team died in 1993,’’ Zambia coach Herve Renard said after beating Ghana. “That meant before the tournament we were able to say, ‘if before some substitutes were able to go to the final of the Africa Cup, why not us?’ And we did.’’

Ivory Coast, meanwhile, has another chance at a first title since 1992 in what could be the last opportunity for a golden generation led by captain Didier Drogba, who turns 34 next month.

Having come close before, the star-studded Ivorian squad has buckled down this year, learnt its lessons from those near-misses, and won five straight games without conceding a goal at the tournament to make the final.

“We came here with a lot of expectation and pressure. With the failures we’ve had in the past, we understand we haven’t won it yet,’’ Ivory Coast coach Francois Zahoui said as his team, ranked No. 1 in Africa, braced itself for one last hurdle.

The Ivorians dominated a stubborn Mali team, but couldn’t convert that into goals at Stade de l’Amitie until Gervinho broke clear after a defensive error and raced half the length of the pitch to score what turned out to be the decider in the 45th minute.

Drogba and Yaya Toure both hit the post early and Drogba was also denied twice by Mali goalkeeper Soumaila Diakite when clear through.

Mali couldn’t threaten at the other end despite its gutsy defending and Ivory Coast’s players celebrated by running to their orange-clad fans at fulltime to thank them for their support.

At Estadio de Bata, Ghana was expected to beat Zambia and set up a meeting of the continent’s top two teams.

But Gyan’s eighth-minute spot kick was saved by Kennedy Mweene to echo the striker’s costly penalty miss in the World Cup quarterfinals, and Mayuka put Zambia through to what’s likely to be one of its most emotional football matches.

Renard and the Zambian squad said they will now visit the scene of the 1993 crash to pay their respects when they arrive in Libreville ahead of the final.