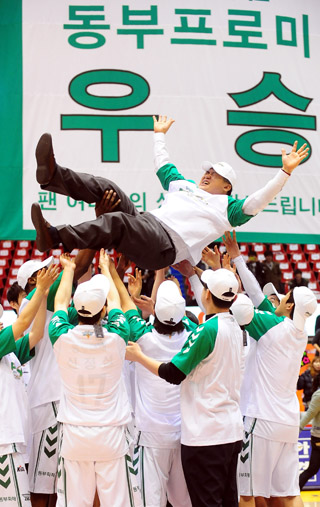 For Wonju Dongbu Promy coach Kang Dong-hee, the victory over the Busan KT Sonicboom on Tuesday not only clinched the regular season title, but also signified his emergence as one of the Korean Basketball League’s elite coaches.

At Sajik Gymnasium in Busan, the Promy beat the Sonicboom 73-60 and made history by clinching the title in just 47 games (40-7). They broke their own record set in the 2007-8 season when the Promy won the title in 48 games.

“This will be the most memorable victory of my career,” Kang said after the win on Tuesday. “The starting five, the players coming off the bench and everyone who played a role in practice made this trophy happen.”

It seems as though more celebrations will follow in the coming week as Kang’s Promy is on the verge of setting new KBL records for the longest winning streak and most wins in a single season.

The team has won its last 14 games and will attempt to break the 15-game record set by the Anyang SBS (currently the KGC) in the 2004-5 season. With seven games left, the Promy is also in a good position to surpass the Sonicboom’s record of 41 wins set last year.

While the team tries to cement its place as one of the best in KBL history heading into the playoffs, the coach has already left his mark on the league.

The 46-year-old became the first to win the regular-season title as a player (in 1997 with the Kia Enterprise), an assistant coach (in 2008 with the Promy) and a head coach. Most experts say the coach of the year honor is already in Kang’s hands.

“When I was a player, I thought I could lift the trophy any season, but when I became a coach I had doubts about raising it again,” Kang said. “But our players fought hard and I’m happy we’re in a good position to win the championship.”

Kang was considered one of the best point guards in the 1990s, but during his time with Kia the spotlight mostly shone on his teammate, the flashy shooting guard Hur Jae who now coaches the Jeonju KCC Egis.

The two faced off during last year’s championship series, but it was Hur who smiled in the end and Kang found himself once again in the shadow. But now, Kang has a title under his belt and is ready to rise above Hur.

“I’m happy that I achieved the title before Hur did,” Kang said. “I think he’d be envious of me by now.”

The victory over the Sonicboom was also personal as it came against coach Jeon Chang-jin, Kang’s former boss. Kang worked as an assistant to Jeon from 2005 to 2009 before he was promoted to head coach of the Promy. The win on Tuesday proved Kang is following in the footsteps of Jeon, his mentor and five-time coach of the year recipient.

“If it wasn’t for what Jeon taught me, I wouldn’t have reached the record this quickly,” Kang said. “In return for his guidance, it is important that I give my best in every game.”

And that’s exactly what Kang hopes to do heading into the playoffs. The team may have won the regular season title in historic fashion, but the championship is still on the line.