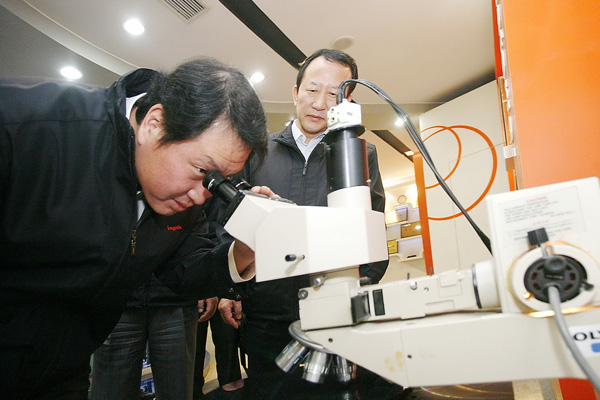 SK Group Chairman Chey Tae-won, who began his three-day business trip to China on Monday, looks into a microscope at a Hynix Semiconductor’s plant in Wuxi, Jiangsu Province, on Tuesday. Chey said he would strive to better localize the plant in China. “We have a so-called ‘China Insider’ strategy to roll out here that involves establishing a second SK Group in China,” he said. The SK chief signed an agreement with Sinopec, the largest Chinese state-run petroleum group, and British oil firm BP to build a 1.2 trillion won ($1.07 billion) petroleum complex in the municipality of Chongqing at a five-star hotel there yesterday. Provided by the company