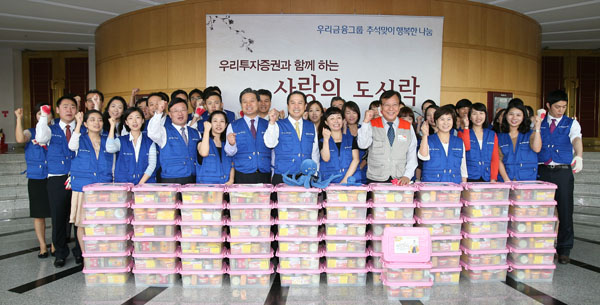 Hwang Sung-ho president and CEO (seventh from right) and employees of Woori Investment and Securities pose for a photo before delivering lunch to low-income families. Provided by the company

Also since 2005 Woori Investment and Securities has been operating the “Woori Cheonsa (Angel) Fund I” together with the worldwide aid group World Vision, to share hope and love with vulnerable people. In October 2011, it launched the “Woori Cheonsa Fund II,” using its experience from the first fund. The fund is a system in which the employees donate part of their salary each month. The company will match the amount raised by the employees, which averages about 30 million won ($26,670) a month and is used for social welfare activities. Since November 2011 the company has organized a volunteer group so the employees can participate in the sharing culture.

The company will also improve the monitoring of social contribution activities and conduct surveys to determine the satisfaction rate of the beneficiaries and the volunteers, and evaluate their programs to improve the quality.

To celebrate the relationships the company has provided these villages with various facilities and even sound systems. For Junam-ri Village the company has offered to sell Fuji apples, a speciality of the village, directly, reducing auction and delivery costs and offering cheaper prices to employees.

To help children in these areas the company began offering scholarships in the second half of 2005. Every year 40 high school students a year from low-income families benefit from these scholarships.

The Smile Microcredit Bank provides small loans without any assurances from the borrower, helping people become financially independent. Since 2009 Woori has donated 500 million won a year and as of October 2011 the microbank has loaned out 18 billion won.