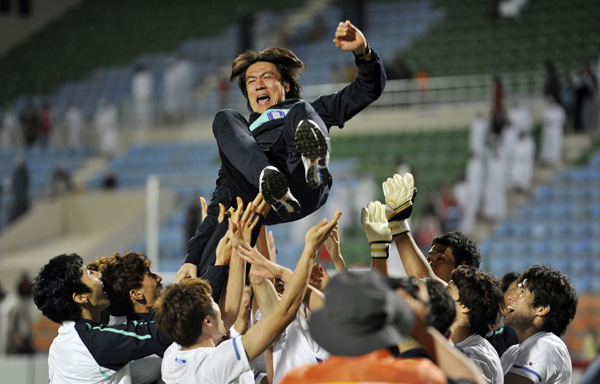 Olympic football team coach Hong Myung-bo celebrates with his players after defeating Oman in their Asian qualifiers for the 2012 London Olympics at the Al Seeb Stadium in Muscat, Oman, on Wednesday. [REUTERS/YONHAP]


Korea will be one of the 16 teams competing for the gold medal in men’s football at the London Olympics this summer.

The Taegeuk Warriors clinched a spot at the Summer Games after routing Oman 3-0 in Muscat during their Group A Asian qualifier on Wednesday night.

In a hostile atmosphere that saw the home crowd throwing water bottles and debris toward the pitch, the Under-23 team scored early, adding two more goals in the second half thanks to strikes from Nam Tae-hee, Kim Hyun-sung and Baek Sung-dong.

The victory assured Korea’s first-place spot in Group A with 11 points after three wins and two draws, ahead of runner-up Oman by four points. With only one game left to play, the young Taeguk Warrors will be heading to London regardless of the results of the final qualifier against Qatar on March 14.

In the Asian qualifiers, only the winner of each of the three groups can directly advance to the Olympics, while the three second-placed teams must go through two rounds of playoffs to capture the last spot.

The men’s team will now compete in the Olympics for the ninth overall and seventh consecutive time, a first among Asian countries. Italy has also achieved this feat.

“I want to congratulate and say thank you to our players and I’m so proud of being the coach of these players.”

Korea had previously struggled to pull out wins in the Middle East, drawing its last three games in the region.

However, Hong’s side put the pressure on the home team early, with Nam scoring the opening goal just 15 seconds after kick-off. The 21-year-old winger found the back of the net with his left foot, striking a loose ball inside the box.

Nam, who plays for Qatari club Lekhwiya SC, played well throughout with his quick feet and penetration from both sides of the pitch.

“Coach told us the first five minutes are important and I think the early pressing led us to score the first goal,” Nam said.

The game was almost leveled in the 26th minute when Iranian referee Alireza Faghani awarded an indirect free kick to Oman inside Korea’s penalty box, ruling that goalkeeper Lee Beom-young had violated the “six second rule” - which stipulates that goalkeepers must put the ball in action within six seconds after gaining control with their hands.

But Oman blew its chance as midfielder Al Hadhri Hussain Ali Farah misfired to the left of the net.

While maintaining the rhythm of the game, Hong’s side doubled their lead in the 67th minute when Kim Hyun-sung’s header beat Oman goalkeeper Mahnad Al Zaabi after a long free kick from Park Jong-woo.

The team excelled four minutes later again as Baek Sung-dong, who replaced Nam in the 65th, struck the back of the net with his right foot after Kim Bo-kyung’s acute pass found him.

The frustrated Oman crowd started to throw water bottles and trash onto the pitch and the game was delayed for nearly 10 minutes. With some 200 Korean supporters at the stadium watching the events unfold, the situation escalated when midfielder Han Kuk-young was hit by a fire cracker, although he didn’t sustain serious injuries.

After the match ended with 10 minutes of stoppage time, Hong heavily criticized the dangerous situation that unfolded during the match.

“It was very disappointing that this kind of incident happened,” Hong said. “Asian football can’t progress unless the aggressive supporting culture is fixed.”

The Korea Football Association said it is seeking sanctions against Oman for failing to keep its fans under control during the match.