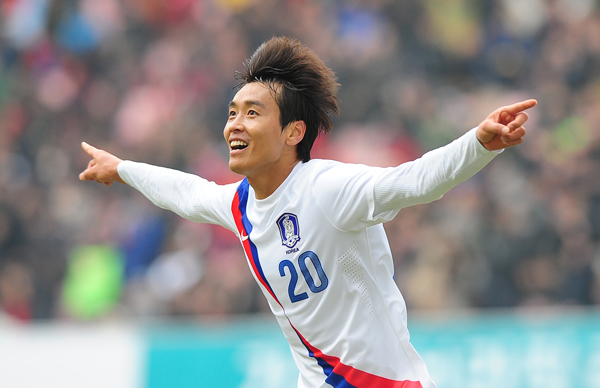 
Choi Kang-hee won his first game as the national football team coach thanks to Lee Dong-gook and Kim Chi-woo, who each scored twice in Korea’s 4-2 victory over Uzbekistan in a friendly on Saturday.

In front of some 29,000 fans gathered at Jeonju World Cup Stadium, veteran striker Lee scored a pair of goals in the first half, while Kim, who is fulfilling his military service with Sanju Sangmu Phoenix FC, found the back of the net twice in the second half.

The Taeguk Warriors improved its overall head-to-head record against Uzbekistan to seven wins, one draw and one loss, but for coach Choi, the result was a morale booster heading into the crucial third-round Asian qualifier for the 2014 FIFA World Cup against Kuwait on Wednesday.

Korea, the leader of Group B, could fail to advance to the quadrennial football event if it loses to Kuwait and if Lebanon, which has the same amount of points as Korea but is only behind on goal differential, beats or draws with the United Arab Emirates.

To implement his new tactics on the pitch and evaluate players before the qualifier, Choi stood with his trademark emotionless face throughout the game, analyzing players’ movements.

Choi, who took the helm in December after guiding the Jeonbuk Hyundai Motors to the K-League championship, said there were some positive performances in the second half, but the team lacked concentration with many substitutes.

“It was a tune-up for Kuwait, so not only the result, but how we played during the match is important,” Choi said. “I told players not to concede a goal and get more shots on target, but the performance turned disappointing in the second half. Some players also overplayed since this was my coaching debut.”

Some good news for Choi was that Jeonbuk striker Lee has showed an impressive performance after making his first start for the national team since last October.

The 33-year-old striker scored the opening goal in the 18th minute with a turning shot inside the penalty box after receiving a pass from Kim Do-heon. It was his first international goal since scoring against the Ivory Coast on March 3, 2010.

But Lee, who was voted as the Man of the Match on Saturday, didn’t stop there, as he added another goal in the 43rd minute with a powerful right foot just outside the penalty box. He now has 27 goals in 87 matches for Korea.

“Lee did well in winter training sessions and was showing good moves on the national team, so I was expecting a lot from him,” Choi said. “He is the kind of player who gets influenced by his mentality, and I think he will perform better against Kuwait.”

Lee, last season’s K-League MVP, had the league’s most assists (15) and second-most goals (16) in 2011 but had struggled to find similar success with the national team under previous coach Cho Kwang-rae.

But under coach Choi, who guided Lee for the last three seasons in Jeonbuk, the veteran is now rising as a core player on the attack.

“Since coach Choi believes in me, I feel a sense of responsibility and need to move one step further,” Lee said. “I will put my personal plans aside against Kuwait and will only play for the team.”

The friendly on Saturday was played without two important European-based players: Park Chu-young of Arsenal and Ki Sung-yueng of Celtic. The two are expected to arrive today and join the team’s training at the National Football Center in Paju, Gyeonggi.