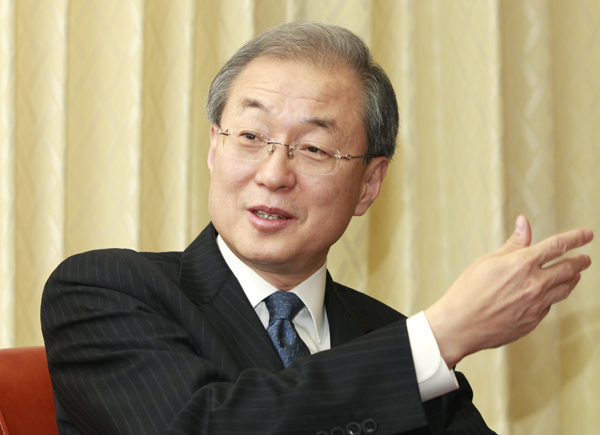 Korea’s trade minister, Bark Tae-ho, stressed that there will be no “renegotiation” of what opposition lawmakers have slammed as the 10 “toxic clauses” of the Korea-U.S. FTA, but he said that “rediscussions” of the deal would be possible to iron out future conflicts if and when they arise.

With regard to the investor-state dispute settlement (ISD) clause, Bark said Korean and U.S. governments agreed to set up a committee on service and investment within 90 days of the deal, which takes effect on March 15, to discuss related issues.

“The ISD clause is a safeguard for both Korean investors abroad and foreign investors willing to make investments in the country,” he said.

As the Ministry of Foreign Affairs and Trade is in the early stages of penning another sizable FTA with China, Bark predicted that the China deal will not be of such a high level, but rather a “comprehensive” and “midlevel” trade pact.

But he said it may be difficult to map out the China deal this year as the Lee Myung-bak administration has no intention of rushing it, contrary to what some critics have suggested.

For the first time since the date of the FTA’s implementation was announced, Bark, a former professor who took office on Jan.1, confirmed to the Korea JoongAng Daily that there will be no backtracking on the deal, in compliance with rules of international commerce.

Q. Does the law allow for the deal with the U.S. to be renegotiated, as opposition party members are threatening to do if they take power?

A. In both countries, there are hundreds of rules and laws. In the U.S., all of the states have different laws, and in Korea, we have different rules in each province. The FTA did not originally fit every provision of all these laws, so we decided to put the laws first and then discuss the deal again to make it fit. If some conflict arises because a specific provision does not correspond to local laws, the trade authorities of both countries can embark on further discussion about the issue. In this sense, we are rediscussing the matter, not renegotiating it. It is unreasonable to say, in terms of international commerce rules, that we can backtrack on the deal, as it has already been agreed between the two countries.

Clearly, some conflicts will arise when dealing with the world’s largest market. Korea’s trade volume with the U.S. amounts to nearly $100 billion. It is unrealistic to think there would be no differences of opinion when so much trade is at stake. However, we can resolve them by holding more talks with the U.S.

Will negotiations with China begin this year? Do you expect them to be on a similar level to the FTA with the U.S.?

There are two things I want to let the public know regarding the FTA with China. First, we are not being hasty in moving to wrap it up. Some people have criticized the president, saying he intends to make the China deal another achievement of his administration [which ends in December]. That is not true. We will not rush to finish it early. I’m not sure if we can come up with a big picture of the deal within this year. The Korus FTA took more than a year to negotiate. So we can’t predict an accurate time span at the moment. Some people are worried that China is in an unusual hurry to sign a free trade deal with Korea. Yes, this is true. China thinks it should accelerate moves because Korea has already clinched a trade pact with the U.S., the world’s largest market. So the birth of the Korea-China FTA stems from the Korus deal.

Another thing I want to tell people is that the government will do its best to protect the agricultural sector. We will hold discussions with China prior to formal negotiations on what will be categorized as sensitive items. We won’t embark on any negotiations unless agreement is reached on sensitive areas.

But the problem is that people are not willing to listen to us. I hope they believe that the government will take care of sensitive items. Since there are many goods that will fall into the category of sensitive items, the China deal will become a “midlevel but comprehensive” free trade pact including trade of services and goods, in comparison with the “high-level” Korus deal.

Working-class people, self-employed businessmen and owners of mom-and-pop stores feel they are not reaping significant rewards from the FTA with the European Union, which took effect last July. How will you convince them to have faith in this and other FTAs?

It will take at least three to five years to see the positive effects of the [Korus] FTA. At present, it is natural that people aren’t really seeing any direct benefits from the EU deal. For example, if someone bought a car just after the EU FTA took effect, he would not enjoy the benefits of the deal as automobile prices are not due to be lowered until between three and five years of the deal taking effect, in tandem with the scaling back of related tariffs.

It is also unfortunate that people who are, in fact, reaping the benefits of the Korea-EU FTA are not making their voices heard, while those with doubts kick up such a fuss and stage protests against the FTA.

There is a theory about international trade that is very difficult to make people understand. It refers to the “asymmetry” of the way in which trade benefits are doled out. Not every [sector in] every country will reap rewards from the FTA, of course. Some will and some won’t. But when the pros and cons are all weighed up, the former always outweigh the latter. So, it is the role of each government to make sure all of the public benefits by redistributing income fairly.

Recently, former Ambassador to Washington Han Duk-soo proposed a way of calculating the economic benefits of the Korus deal. I found it to be very simple and effective.

Korea is forecast to see an estimated 5 percent growth in its gross domestic product within 10 years of the Korus FTA taking effect. Given that Korea’s trade with the U.S. amounts to $100 billion, and its GDP currently stands at $1 trillion, Han said that $50 billion will be added to the Korean economy. As 20 percent of the newly added GDP, or around $10 billion, will be paid as taxes, the government will see an additional 10 trillion won [$8.9 billion] in tax revenues.

Why is free trade with the U.S. so important for Korea?

The U.S. accounts for 23 percent of the global market. Korea entered the U.S. market relatively early, but its share has been falling since 1995. Korea used to send 25 percent of its exports to the U.S., but this dropped to 10 percent by 2005.

Meanwhile, Korea’s exports to China have risen to around 20 percent [of its total exports]. This means that Korea has been retreating from the more difficult U.S. market and making inroads into easy markets like China. It is concerning that we could lose out in the U.S. market if this trend continues.

Because Korea still needs to seek growth, to enlarge our share of the pie, we need to do well in the U.S. market to maintain our leadership in the global market. Even though we may be doing well in terms of trading with other countries, competitors like China, Vietnam and Malaysia can catch up with us if we lose our [regional] dominance in the U.S. market.

In order to keep such rivals at bay, especially China, we should secure a competitive edge in the U.S. market. When the Korus FTA was first broached, commerce experts hailed the deal, saying we would be able to restore our share in the U.S. market through the deal.

The Korus FTA will not only lift tariffs, but also make Korean businesses more willing to put efforts into research and development, and develop better products to stay competitive in an advanced market like the U.S.

Putting aside ideological controversies like being for or against America, the U.S. market is crucial for the Korean economy. The Korus FTA can serve as a breakthrough for Korea to regain its market share there.