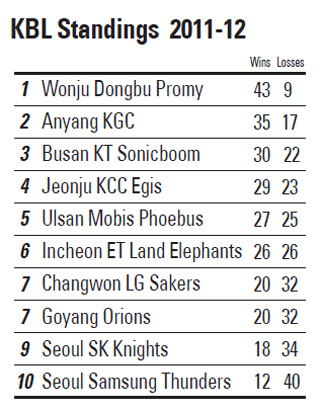 It’s the final week of the KBL regular season and while all six teams heading into the playoffs are already determined, the seeding is for the most part still up in the air.

It seems as though the Wonju Dongbu Promy, who have already clinched the league title and set KBL records for longest winning streak and most wins in single season, are saving up their energy for the postseason.

The team snapped its record winning streak at 16 games after losing to the Seoul SK Knights 91-77 last Wednesday.

The Promy beat the Incheon ET Land Elephants 75-66 on Saturday to quickly get back on track, but were then blown out by the Goyang Orions 91-68. The 23-point loss was the Promy’s worst defeat of the season.

The Promy can still become the first team in KBL history to end the regular season with a winning percentage over 0.800 if it collects just one more victory.

Last week was also a difficult one for the second-place Anyang KGC and third-place Busan KT Sonicboom as both lost their three match-ups. The only team finishing the season on a strong note is the fourth-place Jeonju KCC Egis, who swept all three games.

With two games left to play, the Sonicboom and the Egis can still can swap their seeds, while the fifth-place Ulsan Mobis Phoebus also can lose its position to the Elephants. The Sonicboom is one game ahead of the Egis.

In the first round of the playoffs, the third-place team will face the sixth seed, while the fourth and fifth seeds face off against each other in best-of-five series.

The Sonicboom can clinch the third seed with a win over the Egis on Friday in Jeonju, North Jeolla.

While the Sonicboom control their own destiny, both the Phoebus and Elephants may see a silver lining in dropping to the sixth seed, as both teams have outplayed the Sonicboom with four wins and two losses this season.

The fourth-place Egis, however, have been a more formidable match-up for the entire regular season.