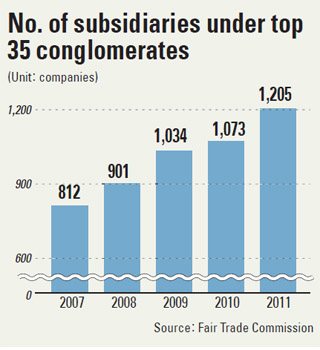 Adding to recent criticism of large conglomerates for poaching business opportunities from small- and medium-size firms, a report by the country’s watchdog showed yesterday that the nation’s chaebol are becoming firmly entrenched in sectors traditionally occupied by minor enterprises.

According to the Fair Trade Commission, 74 affiliates of the country’s top 22 conglomerates are currently operating in areas that have been selected by the government as suitable for SMEs, such as LED lamps, cotton manufacturing and ready-mixed concrete. Other industries in which SMEs lead, but are under threat, include maintenance, repair and operations (MRO), hypermarkets and retail outlets.

Samsung and Shinsegae each have seven subsidiaries in areas considered strongholds of SMEs, while Lotte and GS each have six and CJ and Hyosung five apiece.

The FTC report showed that 17 of the affiliates, belonging to eight of the conglomerates, are owned or run by so-called chaebol children.

Samsung Everland raised 169.2 billion won ($150 million) from food retail sales in 2010, while Lotte Shopping currently operates 351 hypermarkets nationwide. The country’s retail distribution and supermarket industries have long been considered as areas in which SMEs and individual entrepreneurs do, and should continue to, flourish.

“Our study showed that the third-generation scions of conglomerate owners are actively participating in businesses such as bakeries, cafes and the retailing of imported fashion and luxury goods,” said an official from the FTC. “In some cases, we discovered that they [chaebol] have entered areas such as department stores and large discount stores, where their existing retail networks give them favorable advantages.”

“Large conglomerates are dominating the market by using their capital to expand the presence of their subsidiaries,” said Park Sang-in, a professor at Seoul National University.

The watchdog’s report is based on a study of the management systems and business-related changes seen in the country’s top 35 conglomerates over four years from April 2007 to April 2011.

Twenty-nine of them, including Samsung, Hyundai, SK, LG and Lotte, were operated by owner families, while the remaining six, such as Posco, KT and Hynix, were run by professional management groups.

During the four-year period, 652 new subsidiaries were established, of which 393 are still operational. The rest have been merged, spun off or sold.

The data showed that each conglomerate created an average of 2.8 subsidiaries per year, with the top four chaebol increasing them at an average rate of 14.1 percent a year. The conglomerates ranked No.’s 5 to 10 in terms of size saw the biggest expansion in this area, with an average yearly growth rate of 20.7 percent. The comparable rate for the lower-ranked chaebol stood at 7.8 percent.

More than half of the new subsidiaries were created by acquiring shares of existing firms, while 47.9 percent were new enterprises.

According to the FTC, these new subsidiaries contributed an average of 10 percent of the top 35 conglomerates’ total sales and assets over the past four years.

SMEs have become increasingly vocal in recent years of how large companies are muscling in on their turf as the latter have been posting record profits despite the global financial crisis that broke out in late 2008, triggered by the collapse of Lehman Brothers. At the same time, smaller companies have reported large deficits, with many collapsing entirely.

President Lee Myung-bak raised the importance of this issue - or what he called the need to create a “fair society” - in his Liberation Day speech in 2010. Since then, the FTC has been closely monitoring large conglomerates and how they treat their suppliers, as well as checking to see if they give special treatment to their subsidiaries.