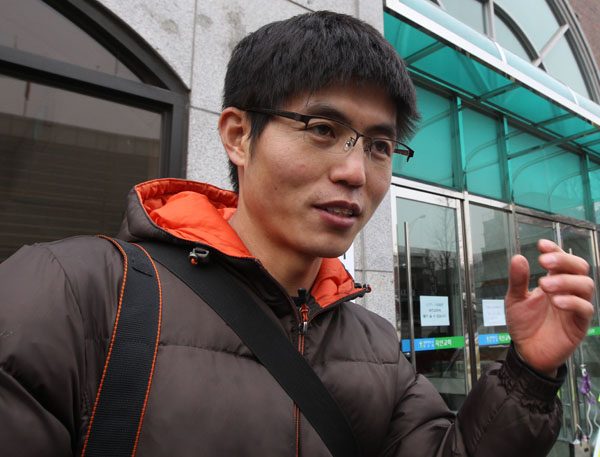 
Shin Dong-hyeok, a 30-year-old North Korean defector who was born in a political prison camp and spent his first 24 years behind its walls, said the most inhumane policy in the camp was a ban on any kind of personal relationship or emotion, especially love.

Shin protested yesterday in front of the Chinese Embassy, central Seoul, against the Chinese government’s likely repatriation of dozens of North Korean defectors arrested in their territory earlier this month. Their exact number is not known, and Beijing has turned a deaf ear to calls from around the world not to send them back to North Korea.

Shin and other defectors in the South predict they will be executed or forced into hard labor in prison camps as punishment for escaping North Korea.

Shin is thought to be the only person in South Korea who was born in a prison camp in the North. 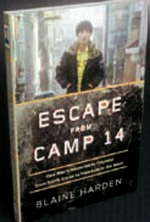 He started his life in Camp No. 14 in Kaechon, South Pyongan Province.

At the camp, Shin said, authorities rewarded some well-behaved prisoners by allowing them to cohabit in a cell for five days ahead of the birthdays of North Korean founder Kim Il Sung or his son, the late leader Kim Jong-il. Shin says he was conceived during one of these five-day forced unions.

But the male and female prisoners were separated after the five days and not allowed any further relationship.

“There were 10 rules in the prison, and one of them was, ‘Don’t have any personal relationship with a member of the opposite sex,’?” Shin said. “I didn’t understand what love, friendship or family meant at the time, which are the principal emotions of human beings.”

Shin said he lived with his mother until he was 11 years old, when they were forcibly separated.

At the age of 14, his mother and elder brother were executed in front of him for trying to escape. Authorities forced him to read out the charges before they were shot to death.

Because of their sins, Shin and his biological father were dragged to an underground prison and tortured with iron rods heated in a fire. Shin still has a large scar on his back from the torture, which crippled his father.

Shin decided to escape in 2005, when a prisoner from Pyongyang told him about life in the capital city.

“He told me he ate hot chicken dishes and rice mixed with beans [before he was arrested],” Shin said. “I had always eaten humble soups of corn. After he told me about the chicken dishes, I dreamed of them every night.”

He and the prisoner from Pyongyang tried escaping by climbing over an electrified fence. The other prisoner couldn’t withstand the electric shock. Shin crossed the Tumen River into China and arrived in the South in 2006.

“When I was in the North, I didn’t know what emotion was, and the only emotion I had was fear,” Shin said. “It was all kinds of fear: fear of being hit, starved, tortured and of dying.”

In the South, Shin works for a human rights organization that helps defectors fly from China to the United States. A book about his life, “Escape from Camp 14,” will be published next month.