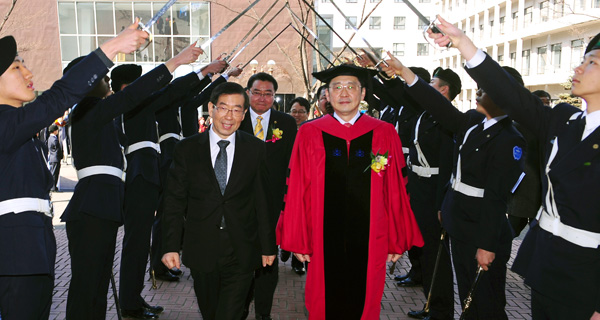 Mayor Park Won-soon (left) walks with Lee Kun, president of the University of Seoul, during the university’s opening ceremony yesterday in Dongdaemun District, central Seoul. The University of Seoul was one of the few schools able to actualize the government’s “half-price tuition” plan. [NEWSIS]


The government’s controversial “half-price college tuition” plan partially affected this year’s tuition for universities. An average of 4.5 percent was reduced in tuition fees at 186 universities and colleges throughout the country this year.

The reduction rate, however, somewhat disappointed many as the Korean Council for University Education said it will “make efforts to reduce the tuition fees in all universities and colleges by an average of five percent,” during an extraordinary general meeting at Sookmyung Women’s University, together with presidents from 150 universities, late last year. 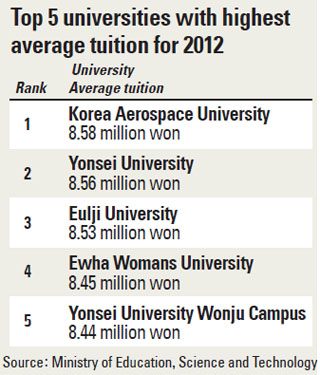 The Ministry of Education, Science and Technology and the Korean Council for University Education revealed yesterday through an academic information Web site (www.academyinfo.go.kr) tuition fees of 186 universities for 2012.

As renowned universities in Seoul, including Yonsei, Korea, Ewha Womans University, Sogang University and Sungkyunkwan University only reduced their tuition by an average of 2 percent, they were being criticized for not taking it seriously enough to make a change.

The number of expensive private universities that charge students more than 8 million won a year decreased by half from 50 last year to 24 this year.

The University of Seoul ranked top in terms of the rate of reduction with a 49.96 percent cut, and was the only university to nearly actualize the government’s half-price college tuition plan. Tuition for the university this year is 2.38 million won, down from 4.78 million won last year.