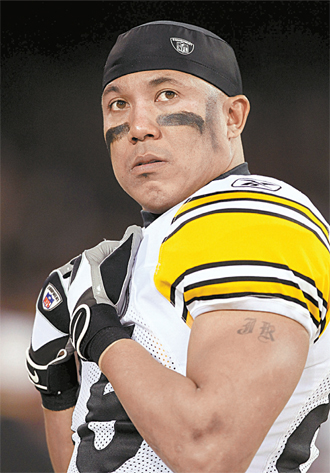 PITTSBURGH, Pennsylvania - Hines Ward has been an icon for the Pittsburgh Steelers for 14 seasons, but no more, as the NFL team announced Wednesday it was releasing the veteran wide receiver.

A four-time Pro Bowl selection, who holds franchise records for receptions, receiving yards and receiving touchdowns, Ward, who was born in Seoul to a Korean mother, will be released by the organization that drafted him back in 1998.

“We had a conversation today with Hines Ward and informed him that we plan to release him of his contract prior to the start of the 2012 NFL calendar year,’’ Art Rooney II, Steelers president, said in a statement on the team’s Web site Wednesday. “Hines has been an integral part of our success since we drafted him in 1998, and we will forever be grateful for what he has helped us achieve.’’

The MVP of the 2006 Super Bowl will finish his Steelers career with 1,000 catches, 12,083 yards and 85 receiving touchdowns. He helped Pittsburgh to three AFC championships and a pair of Super Bowl wins.

The former “Dancing With the Stars’’ champion - who spent last weekend working the red carpet at the Oscars - doesn’t appear ready to put away his cleats just yet, however.

While saying “this isn’t how I wanted this chapter of my career to end,’’ Ward vowed to return for a 15th season next fall.

“I do feel that I still have more football left in me and I am looking forward to playing in the NFL, again, this upcoming season,’’ Ward said in a statement.

Ward, 35, was pretty good at catching passes too, particularly in the postseason. He helped the Steelers to their fifth Super Bowl in 2006 catching five passes for 123 receiving yards and a touchdown in a 21-10 win over Seattle.

“He has meant so much to this organization, both on and off the field,’’ Rooney said, “and we appreciate his efforts over the past 14 years.’’

There was just not appreciation to bring Ward, who turns 36 next week, back at $4 million next season. The Steelers are in the midst of a roster-wide salary purge and a youth movement at receiver.

He may end his career in a different city, but Ward left little doubt where his heart lies.

“I gave my heart and soul for [the fans] every down and I will always bleed black-and-gold,’’ Ward said. AP