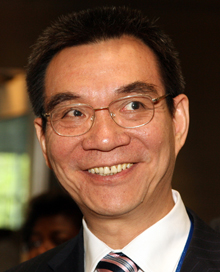 Korea needs to sign a free trade agreement with China without delay to maximize the benefits of trading with a regional neighbor than can expect two more than decades of robust economic growth, according to Justin Yifu Lin, senior vice president of the World Bank.

“Korea and China have a lot of commonalities, and I believe that the FTA will be beneficial for both countries - the sooner the better,” Lin, a preeminent expert on China’s economic development, said on Friday.

“Germany’s growth during the 2008 financial crisis was considered a miracle. But Michael Spence has demystified that German miracle to say it was in effect due to China, as China grew so fast and imported so much [from Germany]. And as you know, China’s growth is good for Korea as well, added Lin, who also serves as the World Bank’s chief economist.

Unlike some of his colleagues, such as World Bank chief Robert B. Zoellick, Lin does not believe the world’s second-biggest economy is heading for a pronounced slowdown.

“I believe an 8 percent [annual GDP] growth can be maintained [by China] for another 20 years,” Lin said during a lecture hosted by Seoul National University’s Institute for China Studies and think tank J-China Forum. The JoongAng China Institute, an affiliate of The Korea JoongAng Daily, helped found the forum.

Lin said China has been able to rack up annual growth of more than 9 percent for the last three decades and can maintain a similar level by adopting a “dual-track” model of mixing open market strategies with government involvement.

He said the country needs to develop according to its comparative strengths and tap into the so-called “advantage of [its] backwardness,” referring to the abundance of technological innovations at its disposal due to its developing country status.

Born in Taiwan in 1952, Lin “went back” to China at the age of 27 by leaving his military post and swimming from a Taiwan-controlled island to Chinese territory, he said.

After getting his doctorate in economics at the University of Chicago, he served as the founding director and professor of the China Center for Economic Research at Beijing University. He was also a deputy at the Chinese National People’s Congress and played various roles advising the Chinese government on economic policy.

Lin said China’s rapid growth has come at various costs, pointing to the widening gulf between rich and poor, large imbalances in terms of savings and consumption, and an imbalance in terms of domestic demand. He said such distortions must be removed to complete the country’s transition to a well-functioning market economy,

but added that this can only happen gradually, in a way that facilitates stability and dynamic transformation at the same time.

Lin sat down for a joint interview with The Korea JoongAng Daily and its mother paper JoongAng Ilbo last week to discuss a range of issues, including if and when China will surpass the U.S. as an economic power, why his outlook on China differs from those of his colleagues, and what he views as the best way of bridging China’s yawning income gap.

Q. You said that China can sustain economic growth of 8 percent a year for the next 20 years. What justifies such optimism?

A. People who are pessimistic about China in general take theories, efficiency models and institutions from high-income countries and compare them with China. This is why people were so pessimistic about China in the 1990s, because at that time economists said, “without privatization, a country will have very low efficiency,” and the theory seemed so convincing. But, is [the theory] right for that nation? Comparing the options, which is better?

For example, many people say that China needs financial liberalization. Overall, [China] should globalize. But we need to understand the main contribution of finance to development.

Finance gets a country the intermediation to mobilize resources into investment in the real economy, where the country is doing its economic growth. But we know that short-term capital inflow is generally very speculative. The capital enters the equity market or the real estate market, and will not contribute to the real economy, but contribute to all kinds of asset bubbles, which will burst sooner or later - and also appreciate currency.

Under such considerations, I am not very keen about the liberalization of short-term capital inflow.

Your prediction seems to run counter to World Bank President Robert Zoellick’s remarks upon presenting the “China in 2030” report in Beijing last Tuesday, when he said that China’s annual growth will slow to half its recent average of roughly 10 percent.

I understand that President Zoellick did not make a prediction about the actual growth rate. Generally, analysis of developing countries posits that it will see rapid growth for several decades, then see a gradual drop in the growth rate. However, my methods of analysis are different in that they look at the main driving power of economic growth - which is how much room there is for technological innovation and the upgrading of industries.

China’s current relative status to the U.S. [in terms of per capita income measured in purchasing power parity] is similar to Japan’s in 1951, Korea’s in 1977 and Taiwan’s in 1975. Under the same conditions, Korea, Taiwan and Japan saw rapid growth for the next 20 years. Once you understand the process of development, China can achieve rapid growth for the next 20 years.

If so, will China overtake the U.S. in terms of economic power?

However, in terms of the size of income per capita, China is still behind the U.S. Per capita income means the level of development in technology, industry and social economics, and the U.S. is still very strong in those terms. China is becoming more important as time passes, but the U.S. will have the largest influence in the world for a [while yet].

China and the U.S. are highly complementary in terms of each nation’s strengths and benefits. I believe that the respective countries can work together and enjoy prosperity together.

You said that one of the biggest challenges that China faces is its income imbalance. How can this be resolved?

I agree that the most challenging issue in China is income distribution, because it’s going to create all kinds of social tensions due to China’s traditional culture that says “income disparity is a more serious problem than poverty” [plus] China’s socialist ideology.

There are two ways to address this. One is the so-called “secondary redistribution,” which is to tax the rich and transfer that income to the poor. The other way is to improve the capital redistribution of income.

Which one would you endorse?

I do not support strong social policies that tax rich people, because those kind of policies will remove incentives for rich people - people are not going to work as hard, and the nation cannot reach the level of dynamic growth that it can with incentives.

In low-income countries, most of the poor work for their income - unlike the rich, whose main source of income is capital in any country. If a labor-abundant country develops its economy according to its comparative advantage, a lot of jobs can be created for the poor, and it will become very competitive. This will cause rapid economic growth, which in turn causes rapid capital formation. The poor can share the benefits of economic growth - and, gradually, the labor force will become relatively skilled.