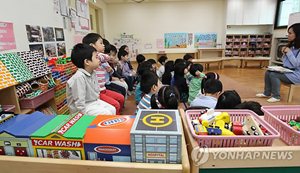 Despite the government’s good intentions, the Ministry of Health and Welfare’s new welfare program to provide free day care for children under 24 months of age, which went into effect last Friday, is being criticized as “short-sighted.”

Critics say the government failed to properly assess the market and didn’t accurately predict the amount of people who would claim welfare benefits.

A mother of two sons aged 3 and 1 had been sending her older son to the SeongEun Nursery in Songpa District, Seoul, and getting a babysitter for her younger son.

Starting from this year, the mother, surnamed Lee, 33, decided to send her 1-year-old to the same day care center as his brother. Lee said she never thought about sending her second son to day care at so early an age, but changed her mind as other mothers told her that she was wasting the free benefits she was entitled to.

“If you don’t send your child to free day care centers, you are considered stupid among mothers of toddlers,” said Lee.

Ham Ok-yoon, 53, director of the day care center said, “Mothers with children under 24 months of age tend to look after their own children at home, but as the government expanded the free day care program for that age group, many mothers began sending their children to our center,” and added, “There was a drastic increase in the number of enrollments compared to last year.” Ham said there are 511 toddlers currently on the waiting list.

According to the ministry, about 306,000 toddlers are currently registered for the welfare program. The ministry expected the final figure to go up to 320,000.

However, only 190,000 toddlers were using the day care centers in the previous year, which means that about 130,000 toddlers are newly registered, and that a large portion of them would not necessarily need to be sent to day care.

“Most of the mothers who are registering for the first time are those who don’t really need the centers’ help,” said an official from the welfare ministry.

A district day care center in Gangnam, southern Seoul, said there were 3,000 names on its waiting list last year, but that number increased to 38,000 this year. One of the caretakers at the center said, “As there are not many children who stop coming to the nursery during the year, there’s hardly any chance for those on the waiting list to be admitted during the year.”

Due to the increase in demand, the government would have to increase its budget for the welfare program by about 200 billion won ($178 million).

The Ministry of Health and Welfare vastly expanded its welfare benefits for families with toddlers, providing free day care for kids under 24 months and free kindergarten for all 5-year-olds from this year, while adding 3-and-4-year-olds starting from next year, regardless of families’ incomes.