Eels are the energy in winger’s arsenal

Eels are the energy in winger’s arsenal 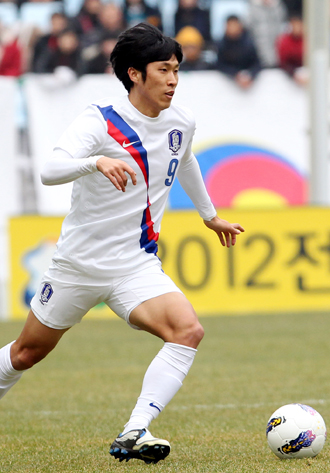 
Since Park Ji-sung left the national team last year, the left wing position has been the site of a fierce competition between a string of players trying to fill his shoes.

Though the void left by Park has been filled by Ji Dong-won (Sunderland), Koo Ja-cheol (Ausburg) and Kim Bo-kyung (Cerezo Osaka), none have yet made it their own.

Now, it looks like there is a new contender waiting in the wings.

Han Sang-wun of the Seongnam Ilhwa Chunma FC was called to the national team in September, though he never got onto the field.

Since coach Choi Kang-hee took over from Cho Kwang-rae last December, Han has started the last two matches for Korea - against Uzbekistan and Kuwait - and has shown he may just have the skills to replace Park.

With a sharp left foot, Han has been impressive. He is expected to play with the national team again in the final round of Asian qualifiers for the 2014 FIFA World Cup.

In an interview with Ilgan Sports, the JoongAng Ilbo’s sports daily, Han said that the secret to his strong performance of late is boiled eels, renowned for boosting stamina, and that he will continue the practice into the new season.

Q. How would you describe your first experience with the national team?

A. When I first entered the National Football Center in Paju last September, I was thrilled. Then, when I walked onto the pitch as part of the starting lineup in the match against Uzbekistan, my heart was pounding. And when I was singing the national anthem, I was filled with emotion and I realized what a great responsibility it is to wear the national team uniform. I was proud to play for my country.

How would you evaluate your performance in the matches against Uzbekistan and Kuwait?

I feel bad that I couldn’t do half the things I’d done in the past. If our opponent had been strong, I would have just blamed myself. But since the friendly with Uzbekistan was my international debut, I was really nervous. The shot I took during the 28th minute in the Kuwait match still remains in my memory. People told me if I had converted that shot into a goal, I could’ve been the cover model for the sports page, but the two matches just showed the things I need to improve.

Is it true that you asked Seongnam coach Shin Tae-yong for advice every day when you joined the national team?

I complained to Shin that things weren’t working out like I thought they would. But he told me to enjoy myself and just show what I could do. That really helped a lot. He’s also given me a lot of support in the club.

What’s your relationship with the other national team players like?

About 90 percent of them are new and most of them are older than me, which is different from my first stint with the national team. Lee Dong-gook and Kim Sang-sik were the first to talk to me and that made me feel comfortable. I’ve become especially close to Lee Keun-ho, who plays the other side of the flank. Lee is energetic and creates space, whereas I love to dribble and pass. We have different styles but I think we balance each other out. He’s also given me some advice for the AFC Champions League on Wednesday against Nagoya Grampus.

What advice have you had from coach Choi?

I didn’t see him, because we all left after the Kuwait match. But when I first got onto the national team, he told me that I deserved to be there because my performance, and that I should play with confidence. It was a big help to me. Choi makes players devoted to the team. He’s a great coach.

Are you ready to compete for a position on the national team against Europe-based players such as Lee Chun-yong?

There are many talented players in Korea and I know I’ll have to compete until the day I retire. If I do my job well, with Seongnam in the K-League and in the AFC Champions League, I will have another chance. If I play for the national team again, I want to play better than I did against Uzbekistan and Kuwait. Just imagining myself playing in the World Cup gives me a lot of energy.