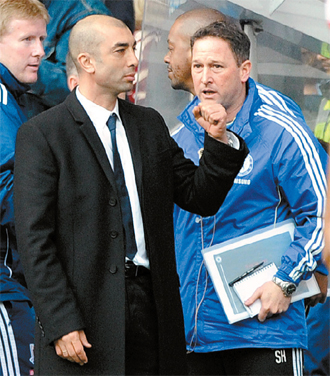 LONDON - Roberto Di Matteo signaled a break with Chelsea’s recent past by insisting his team must adopt a stronger winning mentality.

Di Matteo oversaw a 1-0 victory over 10-man Stoke in his first Premier League game since being placed in caretaker control following the dismissal of Andre Villas-Boas.

Villas-Boas maintained the importance of playing with style during his eight-month stay at the club.

But Di Matteo conceded the victory over Stoke - that came courtesy of Didier Drogba’s 100th Premier League - had been hard-fought.

And he insists Chelsea must maintain that approach during the final games of the season as they attempt to force their way into the top four.

Asked whether this approach marked a change in direction from that set in place by Villas-Boas, Di Matteo added: “I’m looking forward and getting the team in the right frame of mind.”

Drogba proved to be his side’s savior after Ricardo Fuller was sent off in the 25th minute for a stamp on Branislav Ivanovic.

The Ivory Coast striker is out of contract in the summer and Di Matteo refused to be drawn on whether the club should offer the forward a new deal.

“It was a big goal for him and a winning goal for the team. His contract is a matter for the club. It’s not for me to discuss. He has been a great player here.”

Chelsea’s focus now switches to the midweek Champions League tie with Napoli at Stamford Bridge when Di Matteo’s side will attempt to overcome a 3-1 first leg deficit.

“They are a very good team with some exceptional players, but they will face a good team and we will make it difficult for them,” Di Matteo said.

Juan Mata will return to the starting line-up for that game after being left on the bench for the visit of Stoke. The Spaniard was introduced as a first half substitute and provided the assist for Drogba’s goal in the 68th minute.

And Di Matteo said: “I thought it was going to be physical against Stoke, that’s why I left him out.”

Florent Malouda, meanwhile, was again left out of the squad but Di Matteo insisted there was a still a way back for the France international.