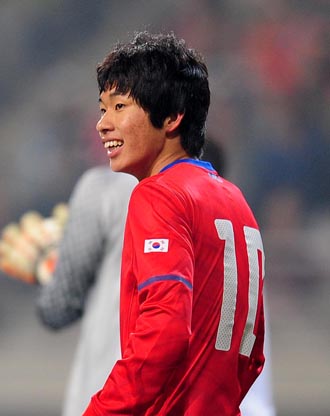 For Olympic football team midfielder Yun Il-lok, Wednesday’s match against Qatar was a frustrating scoreless draw that saw his chance to represent Korea in London this summer diminish.

The U-23 team, led by coach Hong Myung-bo, had already qualified for the London Games, so little was at stake during the final group match, which ended in a 0-0 stalemate at Seoul World Cup Stadium in western Seoul.

But for Yun, the disappointing result largely reflected the 20-year-old’s series of missed shots. Yun took eight shots on Wednesday - more than any other player on the pitch and double Qatar’s total for the game - but didn’t find the back of net.

“I feel bad that I blew so many chances,” Yun said in a post-match interview.

“I also felt sorry for my teammates because they had a difficult game because of me. Overall, I would rate my performance at 50 points [out of 100] today.”

Yun, who is a sophomore with Gyeongnam FC of the K-League, has had a series of unfortunate incidents representing Korea this year.

In January, Yun was included on the roster for the 41st King’s Cup, a friendly tournament in Thailand, but had to withdraw during the tournament because of an injury. He watched Korea’s first-place finish from the sidelines.

Misfortune continued in February when he was left off the roster for two crucial Olympic qualifiers, against Saudi Arabia and Oman.

Yun said he hasn’t given up his goal of playing in the Summer Games in July and still hopes to make the 18-man roster.

“I expect I will have another opportunity if I perform well in the K-League,” Yun said.

“Last year, it was difficult for me to adjust to the team .?.?. but this year, I will sharpen my attacking skills more and get some numbers.”