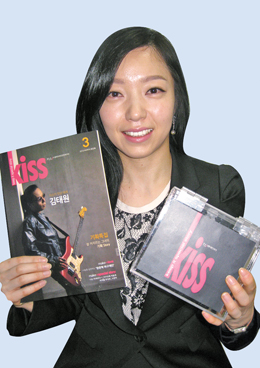 Nam Kyeong-rim is the publisher of Kiss, the nation’s first magazine for single mothers. The first issue of Kiss was published Monday. By Kim Yun-ho

Its publisher, Nam Kyeong-rim, said her decision to launch the magazine was based on her own experiences.

“I grew up in a household run by a single mother, so I know how hard it is for single mothers to take care of their families,” said Nam, the CEO of ETC Corporate Cultural Institute in Ulsan.

“After I visited facilities for single mothers, I could not stop thinking about ways to help them,” Nam said. “Luckily, I heard about Britain’s The Big Issue magazine, which helps homeless people to stand on their own, and that’s where I got the idea to publish Kiss.”

The first issue of Kiss was more than two months in the making. It was created with the help of 10 volunteers, including guitarist Kim Tae-won of the rock band Boowhal, who created the cover.

It contains interviews with well-known figures such as Yang Jun-hyuk, a former Samsung Lions slugger, and Professor Seo Kyung-duk from Sungshin Women’s University, who is the chief communications officer for the Dokdo islets.

Also featured are stories about single mothers and poems and essays they have written.

Although the magazine is free for readers, there will be a box for donations next to newsstands, and all proceeds will go toward a facility for single women in Ulsan named Mulpure.

Nam said this is just the first step for the fledgling magazine.

“I hope one day Kiss will spread around the globe,” she said.