Keiko Kawabara, a 32-year-old company worker and a self-admitted admirer of Jang Keun-suk, a shaggy-haired heartthrob actor, held up a “Cosme Road” map detailing in Japanese the sea of cosmetics stores lining the streets of Myeong-dong, central Seoul.

Sunday’s bevy of tourists shuffled shoulder to shoulder, with shopping bags full of cosmetics products tucked securely under their arms, by the faces of Hallyu celebrities stretched across the front windows of Missha, The Face Shop and Etude House.

“Buying Korean cosmetics is a must-do activity in Myeong-dong,” said Kawabara, who first used Korean cosmetics when her boyfriend bought them during a business trip to Seoul. “They’re cheap, but of good quality.”

Kawabara bought over 500,000 won ($445) worth of cosmetics from five different stores, including facial masks and moisturizing creams made with snail mucus. 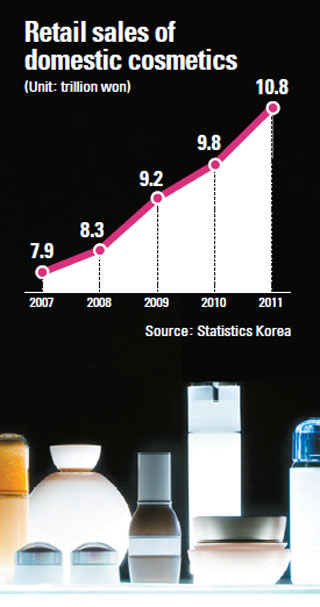 And her shopping habits do not deviate from the Myeong-dong norm.

Market observers said the sharp increase is attributed not only to an increase in spending by Koreans, but is also driven by foreign tourists like Kawabara who are lured to shopping areas like Myeong-dong by the Korean Wave and the bargains on quality products.

The domestic cosmetics market has been steadily growing from 7.9 trillion won in 2007 in tandem with the rising popularity of the Korean Wave, experts said.

“Foreign tourists account for 80 percent of all sales at our Myeong-dong flagship store alone,” said Seo Jin-kyung, a spokeswoman for Nature Republic. “Unlike Korean customers, who buy cosmetics in small quantities per visit, foreign tourists buy in bulk. We’ve even seen some Japanese customers buy over 100 to 200 packs of facial and eye masks because it’s easy to use for daily skin care and it’s convenient to give away as gifts to friends.”

Missha, another popular cosmetics brand, hired TVXQ as its official model, while Seohyun of Girls’ Generation and Kim Hyun-joong of SS501 advertise for The Face Shop.

Among the 58 ground-level shops on Myeong-dong’s Jungang-no - the main drag stretching 300 meters (985 feet) from Myeong-dong Station to Myeong-dong Theater - 18 are discount cosmetics brands and most market their products with pictures of Hallyu celebrities.

Market observers said another cause of the rapid growth in cosmetics sales is the boom in low-cost brands that began in the early 2000s.

After Missha and The Face Shop were hugely successful, other players, including Nature Republic and Etude House, jumped in the market.

“This has generated healthy competition which helped increase the overall size of the domestic cosmetics market,” said Lee Yoon-ah, a spokeswoman at Amore Pacific, the nation’s No. 1 cosmetics maker. “The cosmetics industry is regarded as one of the oldest manufacturing industries in Korea. With the long history, Korea’s cosmetics industry’s global competitiveness is top notch.”

The growing popularity of Hallyu has also attributed to a growth in the export of local beauty products.

“Half of cosmetics exports were shipped to Japan and China, where Hallyu is widespread,” said an official from the Korea Cosmetics Association.

Missha, the first low-priced Korean cosmetics brand to enter the Japanese market when it opened in Tokyo in 2005, currently runs 25 independent cosmetic shops in Japan, and its products are also available at over 10,000 drug stores there. Missha said it recruited Japanese sales and marketing experts to boost its influence in the world’s third-largest economy.

Products of The Face Shop are currently available in Japan at 400 supermarkets, convenience stores and drug stores operated by Japanese retail giant Aeon.

And The Face Shop, which first entered the Japanese market last April, aims to expand its number of shop-in-shop concept stores to 1,200 within three years.

Broadcom, Google and Kakao Mobility in the FTC's sights