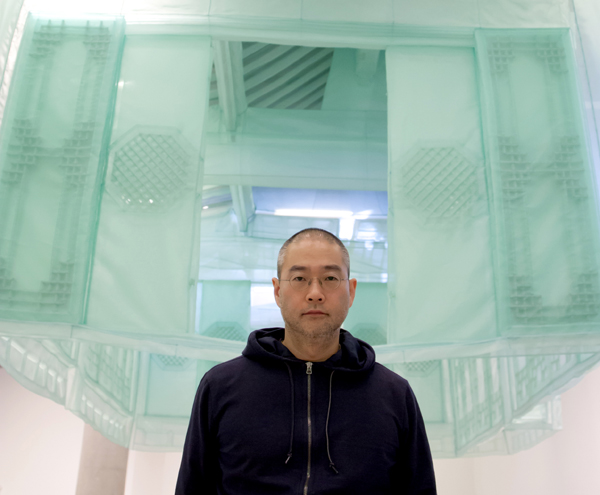 Artist Do Ho Suh with his 2012 work “Seoul Home / Seoul Home” behind him at Leeum, Samsung Museum of Art. His large-scale solo show at the museum started yesterday and continues until June 3.By Park Ki-su


Phantoms of architectural structures have occupied a museum in central Seoul. 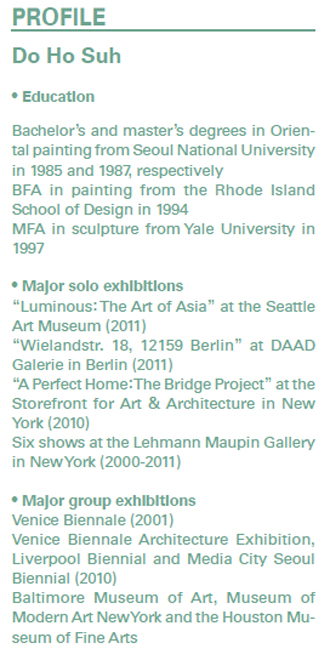 Life-sized sculptures made of translucent fabric, a model of a hanok (traditional Korean house), recreated apartment units, the facade of a Western-style building and other structures fill the Leeum, Samsung Museum of Art in central Seoul. They are all part of the solo show of Do Ho Suh, now one of the hottest Korean artists in the international art scene.

These spectacular sculptures feature surprisingly elaborate details, ranging from the decorative frames of the hanok’s doors to a basin in the apartment. But at the same time, they look like mirages or ghosts due to the ethereal quality of their materials. All of them represent the past homes of the 50-year-old artist, who has lived a nomadic life around the world, with bases in New York and London.

“The works are my memories about the homes and the ambience therein,” Suh said in an interview with the Korea JoongAng Daily at his office in Seongbuk-dong, northern Seoul, on Wednesday.

“You could think that they are the exact reproductions of the homes. But, in fact, they are minimal representations created to evoke the memories, ambience and other non-physical aspects of the homes.

“And through the works, the homes have been relocated from their former contexts into a museum space, a new context, giving them new meaning.”

His office in Seoul is located near the house of his father, Suh Se-ok, 83, a famous painter. The house is where the artist spent his childhood and is the hanok recreated in the exhibition.

He said his continuing interest in homes and in de- and re-contextualizing them originates from the experience of living in the hanok.

“I lived in the hanok, which was surrounded by Western-style houses,” he said. “I’d already had an interest in spaces at that time.

“But I relocated to an unfamiliar space when I went to study in the United States in the 1990s. That was when I became serious about my interest in spaces and their differences, borders and identities.

“I felt very uncomfortable because of the delicate differences in the locations of switches, the height of the sink and other things between my new home and my home in Seoul. So I began to measure the new home with a tapeline, both in centimeters and inches. That led to me to start re-creating homes in my artworks.” 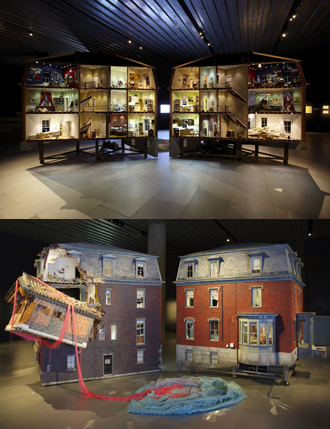 “Fallen Star - 1/5 Scale” (2008-2011) is seen from two different angles. The mixed-media work shows a hanok tethered to a parachute colliding with a Western-style building. It reflects the culture shock that Suh experienced when he first went to study in the U.S. in the early 1990s.

Over the years, those works have brought the artist increasing acclaim.

Suh was selected as one of the three most important living Korean artists along with Lee U-fan and Kimsooja in a survey of 53 art critics and curators by Kim Daljin Art Research & Consulting late last year.

He has held solo shows at many galleries around the world including New York’s Lehmann Maupin and London’s Serpentine. He represented Korea at the 2001 Venice Biennale and was invited to the 2010 Venice Biennale of Architecture.

In the Leeum exhibition, “Do Ho Suh: Home within Home,” which continues until June 3, he presents 43 of his works including drawings and video. But most of the works are sculptures and installations related to homes, most of which have rarely been shown in Korea due to the difficulty of exhibiting such large pieces. 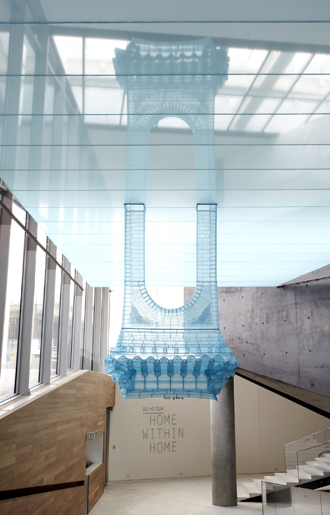 “Reflection” (2005-2011), one of Suh’s translucent fabric sculptures, is based on the gate of the hanok in Seoul where he lived when he was young. It gives viewers a surreal feeling, as if they were looking at a reflection of the gate floating on water

Q. Why do you recreate your previous homes with fabric?

A. My work involves putting clothes on spaces. To me, the extension of clothing is architecture. Both your clothes and your home are personal spaces that surround and cover you and represent your identity. Clothes are a mobile personal space you can carry with you anywhere you go. So how about carrying your homes with you, after re-creating them in fabric? My works have come from the idea.

But my works actually represent the memories and nonphysical aspects of my homes. That’s why I use translucent fabric. I want the results of my works to look like mirages, even though they require a great deal of labor and meticulous processes.


It seems that many of your works have been inspired by both clothing and homes. When did you start being interested in clothes?

When I went to study at Rhode Island School of Design in the early 1990s, I happened to attend a class on figures in contemporary sculpture. I had thought it would be a sculpture-making class, but it was about the function of everything related to or surrounding human bodies. This class changed the way I think.

While I was attending the class, the 1992 Los Angeles riots broke out. The Korean-American owners of supermarkets in the area took up guns to protect their properties but their actions were considered to be too aggressive and it was dealt with in the U.S. media in a negative light. I felt that Americans misunderstood [the Koreans] because they didn’t know the culture of Korea, where all men have to go through military service and are familiar with guns.

So for a class project I decided to make something to show my identity as a Korean man - something related to military service. The result was “Some/One,” a suit of armor made of military dog tags. [The work is considered representative of Suh’s early years.] Dog tags stand not only for the soldiers’ identities but also their tombstones. In other words, they replace them when their bodies cannot be found. The “Some/One” suit of armor is a piece of clothing for the military and consists of the absence of soldiers. It is hollow and empty yet has a exoskeleton made of dog tags. 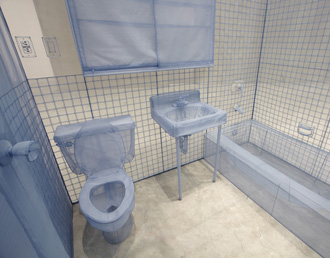 At Leeum, you show works that partially re-create your past homes. But whereas your New York and Berlin apartments sit on the floor so that viewers can enter them, your Seoul hanok hangs in midair. Why?

I made the first work about my home in Seoul in the late 1990s for an exhibition at the Korean Cultural Center in Los Angeles. There was a spiral staircase linking the center’s first floor, which showed replicas of Korean artifacts, and the second floor, which showed contemporary Korean art. As I’ve been always interested in in-between or transitional spaces, I suspended my work from the ceiling above the staircase so that visitors going up the stairs would pass under it.

In addition, when I made that work, I thought about my old Seoul home in a foreign country - from a distance in terms of time and space. So I had the work hang in midair like a dream. Since then, I’ve hung my two “Seoul Home” works from the ceiling in every exhibition.

In the future, all my past homes might be suspended in midair. As the memories about them fade, they get more distant from the ground and float in the air.

Aren’t you afraid that viewers will damage the works?

Of course I’m somewhat concerned, but if an artist worried about that too much, he or she could never make anything.

In fact, I have patterns for my fabric works, so if they are seriously damaged they can be made again. They can even be mass-produced.

I am against the view that an artwork has great value only when it is made by the hands of an artist and that, when it is physically damaged, its value is also damaged irrevocably.

You know the artist Felix Gonzalez-Torres. He made an installation consisting of a pile of candies. Viewers can take the candies and the museum refills the pile, following the artist’s guidelines on the form of the pile and so on. Even after he passed away in 1996, museums could exhibit the work by following the guidelines. But now that those kinds of candies are no longer produced, museums are debating about whether it is okay to use another kind of candy in order to exhibit the work. I guess the artist wouldn’t mind.

What is important is the artist’s concept. I’ll have to endure possible damage to my works, as I want viewers to experience them. What an artist should be concerned about is how to make and present a work - not how to preserve it.

Your works seem to be more intellectual than emotional. How would you respond to that?

The structure of my works is rigorous, so I guess that by “intellectual” you mean “rigorous.” If you want to make something that’s intellectual, you should make it in a rigorous manner. I try to be rigorous in my work, but I’m not an eccentric person. I would have been a good office worker, if I hadn’t chosen to be an artist. [Smiles.] Still, I’m mischievous at the same time. That’s my driving force.