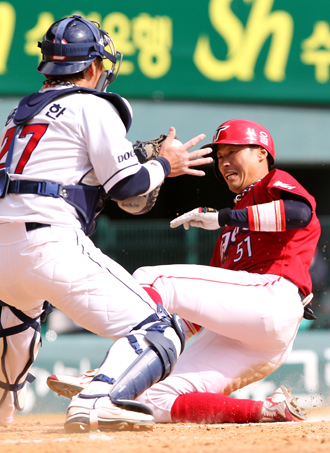 Gwangju Kia Tigers outfielder Kim Won-seob, right, is tagged out by Seoul Doosan Bears catcher Yong Deuk-han during the top of the seventh inning in their KBO exhibition game at Jamsil Baseball Stadium in southern Seoul yesterday. The Bears won 3-0. The two teams played the first game in the two-game series on Saturday, but the game was called off after the fifth inning due to bad weather. The Saturday game ended in a 2-2 draw. By Lim Hyun-dong