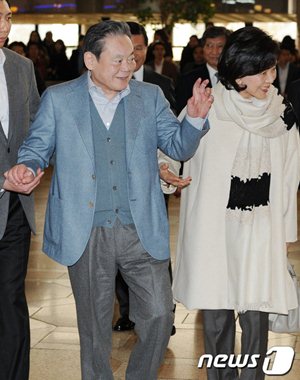 The combined shares of listed companies owned by Lee, his wife and children surged 25.4 percent or a little over 2.6 trillion won from a year ago, according to the data compiled by Chaebol.com, a conglomerate research firm.

Samsung is Korea’s largest family-owned conglomerate, known here as chaebol, with its affiliates globally dominant in such areas as electronics and shipbuilding.

Lee himself controlled stocks totaling more than 10.5 trillion won, up 21.7 percent on-year. This makes him the first person in Korea to own shares exceeding 10 trillion won.