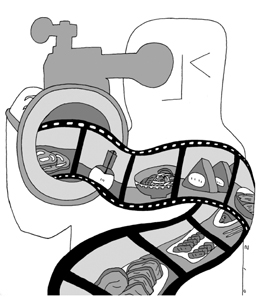 A single documentary brought obscure filmmaker-producer Kim Jae-hwan both fame and criticism when it was released in May 2011. “The True Taste Show” exposed collusion among restaurant owners, broadcasting stations and brokers that led to the rise of now well-established restaurants. It was the first documentary in Korea to take a hard look at corruption within the broadcasting industry.

Kim’s project was well received, with viewers - who had been fed information from national broadcasters - applauding the bold documentary. The targeted broadcasting stations, however, went on the attack and sued the director.

About 10 months have passed since the release of “The True Taste Show,” but Kim has not put the issue to rest. The director has brought the corruption back into the limelight, this time through a JTBC television program entitled “The Migak Scandal,” which airs every Sunday night. Migak means a sense of taste in Korean.

The show deals with a diverse range of issues in the food industry, from hanwoo (Korean beef) restaurants that falsely claim they use 100 percent domestic meat to the dirty secrets behind deep-fried chicken. 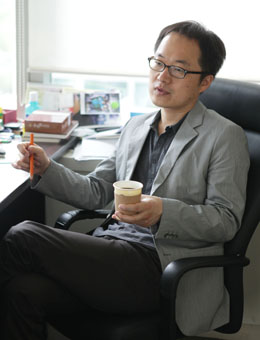 According to the show, many deep-fried chicken joints use inedible darkened cooking oils when making chicken that is coated and served with hot and sweet pepper sauces.

Most owners of deep-fried chicken restaurants believe the red sauce covers the brown spots on chicken, the program stated.

The JoongAng Ilbo recently caught up with Kim, asking him questions about his recent challenges as a television producer and what motivates him to shoot such a controversial program. The following are excerpts from the interview.

Q. There are a few similar shows on the air that reveal some ugly truths about the nation’s food and dining industries. What differentiates your show from the others?

A. “Zero Complaints” on MBC and “Consumer Report” on KBS also deal with many food-related issues such as unsanitary kitchens and false information about food origins. But “The Migak Scandal” differs in the sense that it focuses on problems caused by the media, which often exaggerates information.

If you focus on this angle, you will find out a lot. For example, many food shows introduce the “favorite” dining spots of various celebrities, but the celebrities are not, in fact, regulars of the restaurant and were rather paid by the show.

What they say during the show is, “It’s as good as always,” even though they’re trying the food for the first time. What we want to achieve with the show is to reveal the false information. We also hope to shed light on unhealthy foods. A recent episode about convenience store foods is a good example.

Viewers wouldn’t pay attention if we just checked on the food safety of convenience store foods. So we decided to make a Korean version of “Super Size Me.” When participants were going on two weeks, we noticed bad health signs and later realized the huge amount of food additives that are used in convenience store products and the bad quality of rice that is used [for samgak gimbap].

[“Super Size Me” is a hit documentary that was released in 2004. American documentary filmmaker Morgan Spurlock lived on food from McDonald’s for a month and captured how his body changed.]

But you haven’t released the names of the samgak gimbap manufacturers that use the bad quality rice and additives.

We’re thinking about a couple of ways that will enable us to change society for the better. In fact, there are many young people who have no option but to eat samgak gimbap because of financial difficulties. We hope we will see changes from these bad quality samgak gimbap makers while making this show.

Do you think your show can have an impact on society?

My parents’ generation believes in what the media presents. Younger generations are not that different from the older ones.

Young people even reproduce false information they learn from the media by uploading posts on their blogs. I want to help them realize that the media circulates certain information in order to make money.

Fortunately, I can see some people who have started to doubt food shows after “The True Taste Show” documentary. I want to broaden my subjects from food to other areas.

I recently paid a visit to a clinic in my neighborhood, and the doctor there asked me when I’m going to make a documentary about doctors. He said he has many things to tell.

Are you the type of person who can’t stand to see unfair practices or injustice?

I think I’m fearless. Everyone knows what the truth is, but they just shut their mouths. I can’t stand it.

The reason I started this type of show is that I thought we needed to protect people who are sacrificed by false information produced by the media. Recently, people went crazy about the top-five jjamppong [Chinese-style hot noodles with vegetables and seafood] places across the nation.

The posting was written and uploaded by one blogger for fun, but one daily Korean newspaper ran an article about five jjamppong places based on the posting.

As the five jjamppong places became famous, other jjamppong places nearby had to see dropping sales. I think it’s wrong. False information frustrates our good neighbors. I hope I can change society for the better with this show, bit by bit.