Lee Jong-beom bows out of KBO after 19 yrs

Lee Jong-beom bows out of KBO after 19 yrs 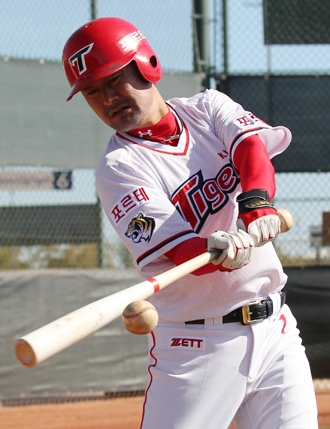 The 42-year-old Lee, who was the oldest active player until Saturday, decided to hang up his jersey after 19 years in professional baseball. The Tigers confirmed late Saturday night that Lee made his decision after meeting with the coaching staff.

“I haven’t thought about what to do next,” Lee said through his team. “I will take a rest for a while and then have a press conference.”

It was a surprise decision since players usually announce their retirement right after the season. In fact, Lee has been travelling with the Tigers during spring training and had four hits in 12 at-bats during the preseason games.

Lee said he made the decision after he found out that he will not make it on the first-team roster this season.

It was reported that the Tigers’ coaching staff had discussed including Lee on the opening game’s roster, but in the end decided to leave the veteran out.

Chief assistant coach Lee Soonchul told the outfielder about the decision on Friday and asked him to start the season in the minor league or as a “playing assistant coach,” which is a position that allows a player to coach and play at the same time.

Lee then requested a meeting with Tigers manager Sun Dong-yol to discuss his future.

At the meeting, the Tigers offered Lee support for an overseas coaching program, promising to keep this year’s salary. But it was reported that the veteran was still disappointed with the club’s decision. Lee moved to Seoul after Saturday’s meetings and didn’t travel with the club for their last preseason game against the Hanwha Eagles in Gwangju yesterday.

Tigers manager Sun said yesterday that he understands how Lee must feel at this moment, but was still disappointed that Lee announced the news abruptly without working closely with the club.

“I know he is having a difficult time,” Sun said. “But if he had taken more time and cooperated with the club to announce his retirement, it would have been better. It was not wise for him to act in such a hurry.”

The 49-year-old manager played with Lee for three seasons with the Haitai Tigers, now the Kia Tigers, and two seasons with the Chunichi Dragons in Japan. Both played pivotal roles in the Tigers’ 1993 championship season.

But the former Tigers star pitcher said he had to treat every player equally when making business decisions for the club. In fact, Sun already has a history of pushing out veterans, with slugger Yang Jun-hyuk’s retirement in 2010 when he was in charge of the Samsung Lions.

“Regardless of age, my principle in forming the roster is based on each player’s performance,” Sun said. “Lee had said from the beginning that he wanted to be evaluated by his performance, but based on his current form, I thought he just wouldn’t last longer on the first team.”

After hearing the news, some Tigers fans rushed to the club’s official Web site and blamed Sun and the club for forcing the fan favorite into retirement.

“I thought this news was a joke,” one fan named Song Jong-keun wrote on the team’s online bulletin board. “If the club was going to retire him, why bring him to spring training? I can’t believe they treat a legend like this.”

Lee was the Korea Series MVP in his debut season in 1993 and exploded in his sophomore year by winning the league MVP award, leading the league in batting average (.393), runs (113), hits (196) and steals (84). His records for most hits and steals in a single season still stand.

After leading the Tigers to two more titles in 1996 and 1997, Lee went to Nippon Professional Baseball after signing with the Dragons, becoming the first batter to go to NPB directly from the KBO. However, his career in Japan was not impressive, suffering a crippling elbow injury.