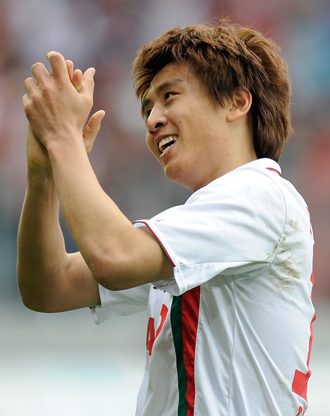 Korean football fans may be disappointed by their star footballers in Europe. Many of them are having a difficult time, but FC Augsburg midfielder Koo Ja-cheol is faring better than most.

Koo is on the rise after moving from VfL Wolfsburg to Ausburg in a loan deal in January. The 23-year-old only had one assist from seven matches with Wolfsburg but now, after finding a new club, he has garnered three goals and two assists in nine matches.

Koo’s third goal of the season came against FC Koln on Saturday when he faced North Korean striker Jong Tae-se. It was first time the two Koreans met in the German Bundesliga, but Koo was the one left smiling after helping his team to a 2-1 victory.

Thanks to Koo’s performance, Augsburg, who is considered to be a weak side, hasn’t lost its last six matches (three wins and three draws). The team has also jumped to 14th place on the table.

In a telephone interview with Ilgan Sports, the JoongAng Ilbo’s sports daily, on Tuesday, Koo talked about his recent performance in Germany as well as his goal for national duty.

Q. What makes you perform well these days?

Recently Shinji Kagawa of Japan has scored 12 goals with Borussia Dortmund, also in the Bundesliga. Are you motivated by his performance?

I never think about other players’ performances. Football is about fighting against yourself, not against others. I’m just walking my own path. Kagawa is smart and has good ball control.

Will you go back to Wolfsburg after this season is over?

I will be able to know that after this season is done. I still have two years left in my contract with Wolfsburg. But I’m thinking about opening all the possibilities.

Are you thinking about the Olympics?

I played more than 20 matches for my country. I know what it takes to be a national team member. I have learned a lot after being criticized and received praise. If I get a chance, I want to help my country at the final round of Asian qualifiers for the 2014 World Cup.

The national team will face Spain on May 30 in Europe. What do you think?

There is always something to learn against strong sides. I think we can build up confidence and competitiveness. Since I’ve been playing in Europe, my fear of European teams has diminished. If I get the call from the national team, it will be a very fun time for me.

Do you have any role models on the Spanish national team?

No. Among world-class players, I respect Park Ji-sung of Manchester United. I really appreciate him because he opened the door for Korean footballers to play in Europe. I occasionally talk to him by phone and ask for advice.

What’s your goal these days?

My goal in Augsburg was to get at least five offensive marks, but I achieved that faster than I expected. Now, I will help my club to remain in the top division. I want to go to the Olympics and the World Cup after showing a good performance with my club.