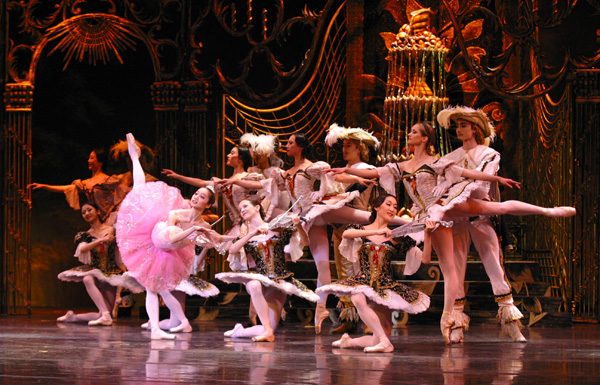 Members of the Universal Ballet Company dance in its rendition of “The Sleeping Beauty,” which opened yesterday and continues for four days until Sunday at the Sejong Center for the Performing Arts’ Grand Theater in central Seoul. Provided by the organizers


“The Sleeping Beauty” has been portrayed in storybooks, movies, cartoons, on television and of course, has become an iconic part of the ballet repertoire.

This week, Universal Ballet Company brings the story of the magical fairy kingdom to life on stage in five performances at the Sejong Center for the Performing Arts from yesterday to Sunday.

As the ballet features a cast of about 80 rigorously trained dancers, it is considered a masterpiece that cannot be performed often. This is the Universal Ballet Company’s first staging of the work in six years.

The ballet was created by legendary composer Pyotr Ilyich Tchaikovsky and choreographer Marius Petipa, who transformed Charles Perrault’s age-old tale, “The Sleeping Beauty in the Wood,” into a ballet that premiered at the Mariinsky Theater in St. Petersburg, Russia, in 1890.

The ballet begins with baby Aurora’s christening, when fairies bestow gifts on the princess, and continues as Aurora celebrates her 16th birthday. Her father, King Florestan, has invited suitors from foreign lands to court his daughter, and Aurora dances with four princes who present her with roses in the “Rose Adagio.”

This dance is the most difficult for the ballerina playing Aurora, according to the company, as she has to “put all her concentration into keeping her balance while putting an elegant smile on her face.”

According to the company, “Sleeping Beauty” is accepted as one of ballet’s greatest masterpieces, along with “Swan Lake” and “The Nutcracker,” all three of which were created by Tchaikovsky and Petipa.

In particular, “Sleeping Beauty” is widely known for its rigorous and precise choreography.

“As it requires textbook-like, high-level technique, [‘Sleeping Beauty’] is a difficult performance for all dancers, but at the same time, it is a piece that all dancers want to attempt,” Julia Moon, the UBC director, said in a press release.

The release went on to note that the ballet is the one that made Margot Fonteyn a star and set her on a path to becoming the greatest ballerina of the 20th century.

In terms of choreography, the ensemble creates magnificent formations, while the lead couple dances the beautiful yet technically difficult Grand Pas de Deux, the company said, while the costumes are patterned after those used in the original work.

Throughout the performance run, dancers from Universal Ballet Company will alternate in the roles of Princess Aurora and Prince Desire.

For the first performance yesterday, ballerina Kang Ye-na, who is known to have an “ideal figure for a ballerina,” played Princess Aurora, while Rhee Hyon-jun, who is a principal dancer with the Universal Ballet, took the role of Desire, the prince who kisses the sleeping princess and breaks the spell.

Kim Na-eun, a ballerina who was recently promoted to senior soloist at the Universal Ballet, and Russian ballerina Konstantin Novoselov, who was also promoted to principal dancer this year, will play the princess and prince for today’s performance.

There are two performances tomorrow, and the cast will alternate then as well.

Kim Chae-lee and newly promoted principal Lee Seung-hyun, who along with K-pop idols has been causing a stir in Japan recently as a Korean Wave “ballet-dol,” will appear in the first performance at 3 p.m., while senior soloist Son You-hee and Lee Dong-tak, both considered as “hidden jewels” by Universal Ballet, will perform in the evening at 7:30 p.m.

The final performance on Sunday will be danced by Universal Ballet’s featured principal duo, Hwang Hye-min and Ohm Jae-yong. The two have danced together for more than 10 years, covering every ballet in the company’s repertory.

Before each performance, the Universal Ballet will offer precurtain commentary about the ballet and its cast. The commentaries were started by the company in 2006 in an effort to make it easier for audiences to understand and enjoy the performance and ballet in general.

According to the company, the commentaries for “Sleeping Beauty” were delivered by Moon, the UBC director, yesterday.

She will hand the microphone over to dancer Kang Ye-na, who played Princess Aurora that night, for the rest of the performances.

The UBC, which has striven to be a socially responsible company by offering free tickets to people from lower income brackets since 2004, said that this year, it will provide free tickets to the ballet to a total of 1,000 people from lower income brackets and North Korean defectors, or 200 people for each of the five performances.