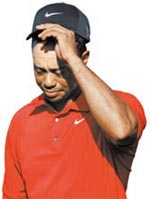 AUGUSTA, Georgia - Tiger Woods is subject to discipline by the U.S. PGA Tour for kicking his golf club after a poor shot at the Masters.

Whether he is fined or not is not likely to be known. The tour doesn’t comment on discipline.

Woods, after a bad miss with a 4-iron into the par-5 15th hole on Friday, hit a poor tee shot with a 9-iron on the par-3 16th. He let the club fall from his hands, then turned in anger and kicked it some 15 yards.

The tantrum received plenty of attention at Augusta National, and it prompted TV analyst Nick Faldo to say that Woods had “lost his game .?.?. and lost his mind.”

According to tour policy, players can be disciplined for conduct unbecoming of a professional even at tournaments that are co-sponsored or approved by the tour, such as the major championships.

A person close to club operations said no one from the tournament had talked to Woods about his behavior in the second round. He spoke on condition of anonymity because club matters are private.

After finishing his round on Saturday with an even-par 72, Woods said he was sorry when asked about the incident.

“I apologize if I offend anybody by that but I’ve hit some bad shots. It’s certainly frustrating at times not to hit the ball where you need to hit it,” he said.

“I certainly heard that people didn’t like me kicking the club. But I didn’t like it, either. I hit it right in the bunker. Didn’t feel good on my toe, either.”

The PGA Tour has been criticized over the years for not disclosing fines.

A person close to Sabbatini later told The AP he had been suspended.