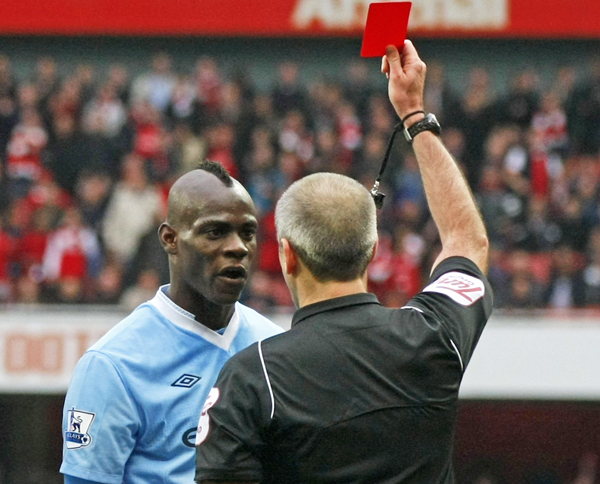 
LONDON - Controversial striker Mario Balotelli will not be picked again this season by Manchester City and is likely to be sold at the end of the campaign, said manager Roberto Mancini after their 1-0 Premier League defeat to Arsenal on Sunday.

Balotelli was sent off for the second time this season as City’s hopes of lifting the top-flight title for the first time in 44 years were effectively extinguished at the Emirates Stadium.

“I have finished my work with him, I am finished today, but I love him as a guy,” Mancini told reporters. “He is not a bad guy and he is a fantastic player but at this moment I am very sorry for him, as he is continuing to lose his talent and his quality.

“I hope he understands he is in a bad way for his future and he must change his behavior. He will not play again [this season] and I will probably try to sell him in the summer. He is a fantastic player but I can’t continue to have Mario on the pitch. We have problems every time,” Mancini said of his fellow Italian after Manchester United opened an eight-point lead over second-placed City at the top of the table.

“Every time, we risk a sending-off, like today. Okay, today it was in the last few minutes but you can score a goal in the last minutes.”

Balotelli has kept the front- and back-page headline writers busy with a succession of on- and off-the-field antics all season.

The Italian international was lucky to stay on the pitch after a dangerous studs-up first-half challenge on Arsenal’s Alex Song that the referee did not see.

Two separate yellow cards later for nasty challenges on Bacary Sagna meant he was dismissed in the 90th minute.

During the week Mancini said that if he had been a teammate of Balotelli in his own playing days he would probably have ended up punching him, and even now he does not speak to him every day “because if I did I would need a psychologist.”

Having known him since Balotelli was a 17-year-old player at his former club Inter Milan, Mancini said he understood his good qualities, too.

“I punished him earlier in the season,” Mancini said, “and anyone who says I allow different behavior from Mario to the other players - this is totally false.”

Real Madrid coach Jose Mourinho, during a spell in charge at Inter, once said Balotelli was “unmanageable.”

“If Mario continues like this, I probably agree with that,” said Mancini, “but he is 22 and when you are young you make mistakes. But I hope for him, not for me, that he can change.

“I don’t know if he will be banned for the next three or four games, but now I need to be sure I have 11 players on the pitch, and with Mario this is a big risk.

“But he needs to change if he wants to continue to play. I have seen a lot of players in my life like Mario that are fantastic and good guys but they lose all their talent and finish their careers in two or three years. That’s where Mario is. He must change.”